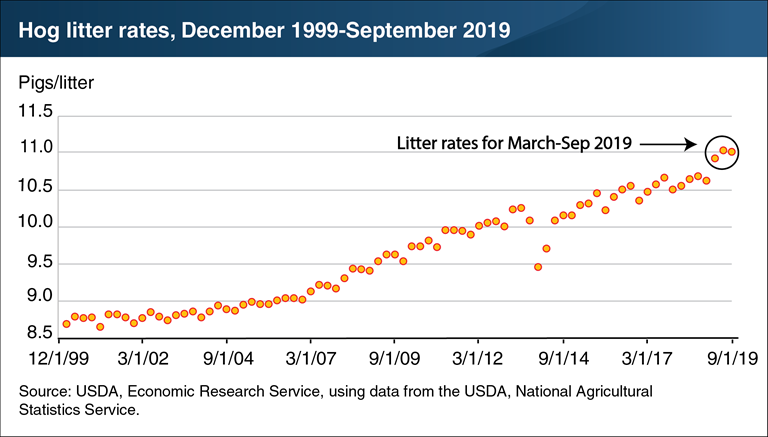 The USDA Quarterly Hogs and Pigs report issued on December 23, 2019 indicated that the U.S. hog industry achieved a third consecutive quarterly litter rate of 11 or more pigs per litter. National litter rates of 11 pigs per litter or more have been a long-standing goal of the U.S. hog industry, although such litter rates have been commonplace in Canada (particularly in Manitoba) and in Europe for quite some time. Factors contributing to the 11+ litter rates in the United States last year—the September-November litter rate of 11.09, the June-August litter rate of 11.11, and the March-May rate of 11 pigs per litter—are varied; they include innovations in pre- and postnatal sow and weanling management and care, sow nutrition, weather adaptations, and management of disease occurrences. Chief among litter-rate enhancement factors, however, are improvements in genetics. Superior litter rates in 2019 likely indicate that distribution and optimal utilization of high-quality genetics is gaining traction in the industry. The suggestion of “more to come” is supported by considerable anecdotal evidence of trickle down effects of genetics transfers from nucleus farms to multiplier farms and then on to commercial farms. It is likely that higher litter rates will characterize the near future of U.S. pork production as highly productive genetics spread further in the U.S. commercial hog sector. This chart was previously published in the USDA, Economic Research Service report, Livestock, Dairy, and Poultry Outlook: January 2020.