China’s share of U.S. cotton and textile imports decreased in the first half of 2019 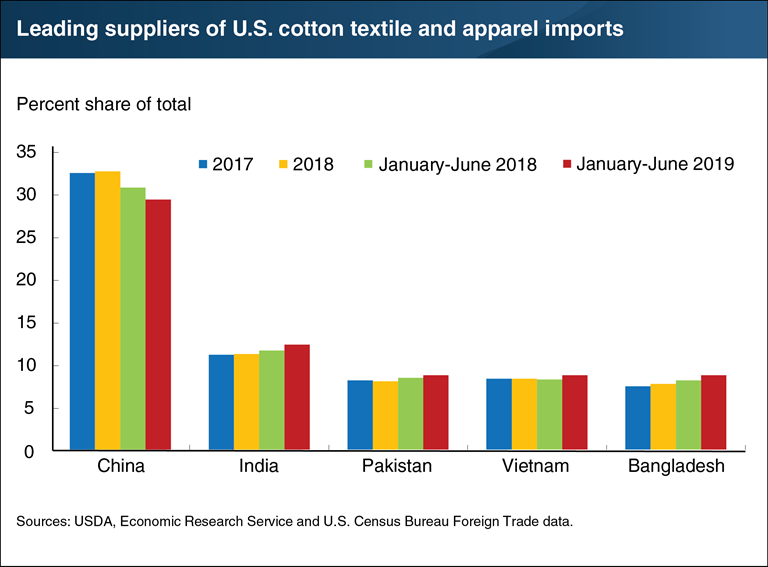 USDA estimates released in August indicate the total U.S. cotton textile and apparel trade rose during the first half of 2019, compared with the corresponding period in 2018. U.S. cotton product imports totaled the equivalent of 9.0 million 480-pound bales of raw cotton during January–June 2019—2 percent higher than the same period in 2018—while cotton product exports declined slightly to 1.7 million bales. As a result, the cotton textile and apparel trade deficit was 4 percent higher during the first half of 2019. The source for U.S. cotton product imports remains concentrated among a handful of suppliers, with the top five countries accounting for nearly 68 percent of total imports during the first half of 2019. Compared with the same period in 2018, the share rose for four of the top five suppliers during the first 6 months of 2019. Only imports from China saw a decrease, as U.S. importers appeared to increase reliance on other suppliers as a result of the U.S.-China trade dispute uncertainty. Nonetheless, China remains the leading supplier of U.S. cotton product imports, accounting for nearly 30 percent of total imports during January–June of 2019. India supplied 12 percent, while Pakistan, Vietnam, and Bangladesh each contributed an additional 9 percent. This chart appears in the ERS Cotton and Wool Outlook report released in August 2019.