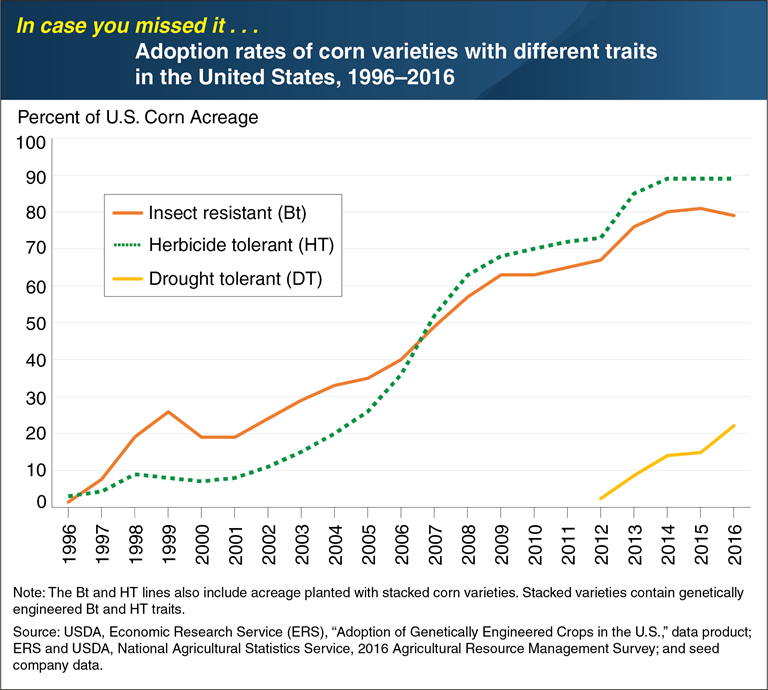 Droughts are among the most frequent causes of crop yield losses, failures, and subsequent crop revenue losses across the world. Genetically engineered (GE) and non-GE drought tolerance became broadly available in corn varieties between 2011 and 2013. By 2016, 22 percent of total U.S. corn acreage was planted with DT varieties. To better understand this growth rate, ERS researchers compared it to the adoption of GE herbicide-tolerant (HT) and insect-resistant (Bt) corn. Between 1996 and 2000, HT corn acreage increased from 3 to 7 percent of total U.S. corn acreage, while Bt corn acreage increased from just over 1 percent to 19 percent. By 2012, nearly 75 percent of U.S. corn acres were planted to varieties with at least one GE trait. In 2016, 91 percent of DT corn fields also had HT or Bt traits. Some evidence suggests that these three traits are complementary. For example, a corn crop will generally be less vulnerable to drought if it is not competing with weeds for water, and if its roots and leaves are not damaged by insect pests. This chart appears in the January 2019 ERS report, Development, Adoption, and Management of Drought-Tolerant Corn in the United States. This Chart of Note was originally published March 21, 2019.