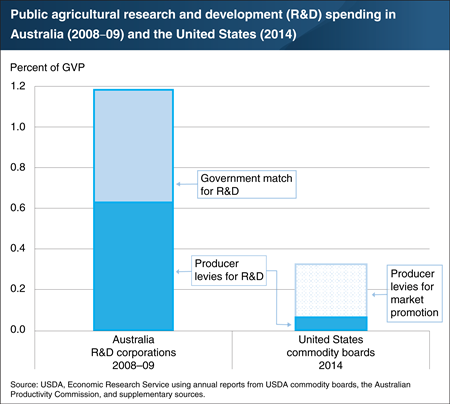 Over the years, some high-income countries have sought to diversify funding sources for their public agricultural research and development (R&D) systems. For example, the United States uses producer levies (or “checkoffs”) to raise funds for both research and market promotion. In 2014, 19 national and dozens of State producer levies raised about $1 billion in assessments on farm commodity sales. About 18 percent (or $180 million) of these levied funds were allocated to support research, mainly at State agricultural universities. By comparison, the Australian Government agreed in the 1980s to match the funds raised by producer levies to support agricultural research. By 1993, producer levies accounted for 18 percent (or 44 percent with matching funds and other grants) of total public agricultural R&D spending in Australia. The matching provision appeared to significantly strengthen the incentive for producers to establish levies to support research. In 2008/09, producer levies for agricultural research in Australia amounted to more than 0.6 percent of the gross value of commodity production (GVP). By comparison, total Federal and State producer levies raised in the United States in 2014 amounted to less than 0.05 percent of GVP. This chart appears in the ERS report Agricultural Research Investment and Policy Reform in High-Income Countries, released May 2018.