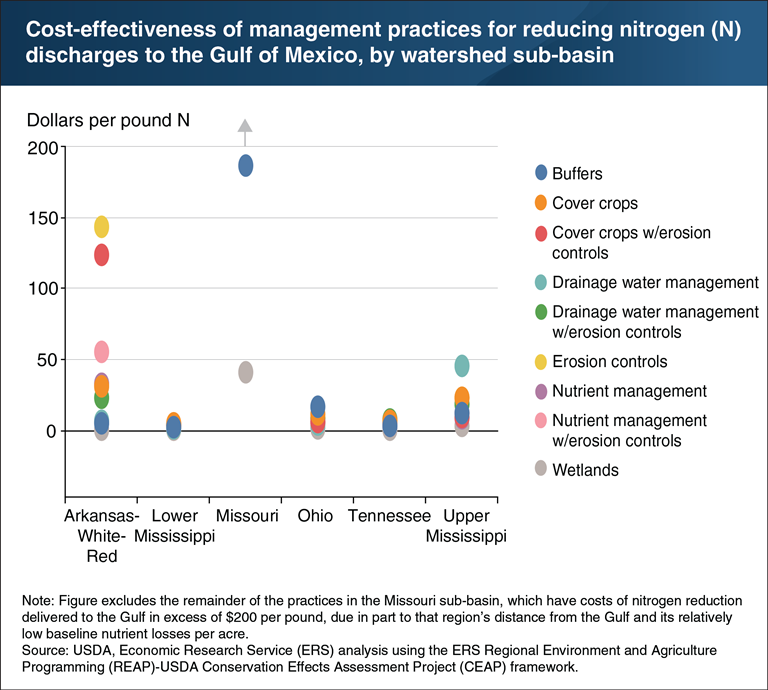 Every summer, a large area forms in the Gulf of Mexico where dissolved oxygen is too low for many aquatic species to survive. This “hypoxic zone” is fueled by nutrient (nitrogen and phosphorus) runoff from the Mississippi/Atchafalaya River Basin (MARB), a region containing about 70 percent of U.S. cropland. Implementing a cost-effective strategy to reduce nutrients arriving at the Gulf by 45 percent would involve a range of land-use reallocations and conservation practices within the MARB. ERS researchers estimated that the most cost-effective practice would generally be optimally placed wetland restoration, especially in the Lower Mississippi and Tennessee sub-basins. Buffers would also generally be more cost effective than on-field practices because they treat nutrient loss from their surrounding areas. However, the terrain within the MARB offers limited opportunities for buffer and optimal wetland placement. Drainage water management, nutrient management, and cover crops (when used with structural erosion controls) were also generally more cost effective than the other practices and combinations of practices as detailed in the chart legend. The lowest nitrogen reduction costs per pound discharged to the Gulf were estimated to occur in the Lower Mississippi, Tennessee, and Ohio sub-basins. This chart appears in the September 2018 Amber Waves feature, “Cost-Effective Strategies for Reducing Cropland Nutrient Deliveries to the Gulf of Mexico.”