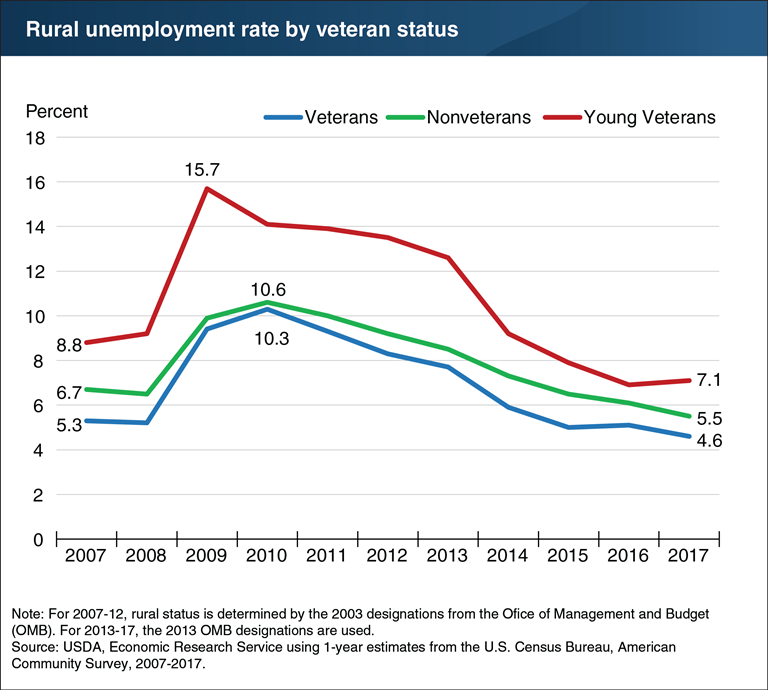 Rural veterans find themselves in a better employment position today than they did in the years following the Great Recession. The unemployment rate for rural veterans has declined since peaking at 10.3 percent in 2010. In 2017, it stood at 4.6 percent, its lowest rate in the last decade. The unemployment rate for young rural veterans (ages 18 to 34) has seen a large decline too—from a high of 15.7 percent in 2009 to 7.1 percent in 2017. Young transitioning veterans can face high unemployment due to service-related disability or a lack of civilian work experience, which become greater obstacles when the economy is weak. Although the post-recession national economic upturn is driving a drop in unemployment for all veterans, a concerted national effort to hire veterans also appears to be helping close the employment gap for young veterans. That effort includes greater recognition of the skills veterans learn during their service—such as discipline and timeliness—and the value of those skills on the job. This chart provides an update to the ERS report, Rural Veterans at a Glance.