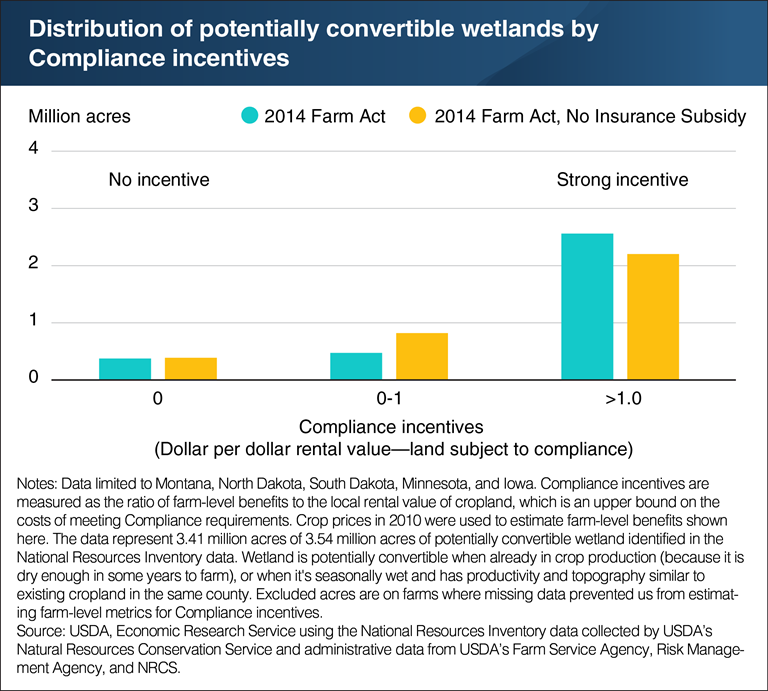 Wetlands provide a wide range of ecosystem services in all parts of the United States. For most U.S. agricultural programs, farmers who receive benefits must refrain from draining wetlands on their farm. The 2014 Farm Act re-linked crop insurance premium subsidies to this provision, known as Wetland Compliance (WC), for the first time since 1996. ERS researchers examined the effect of premium subsidies on farmer’s compliance incentives under the 2014 Farm Act. (Because of data limitations, ERS researchers focused on States that include the Prairie Pothole region: Montana, North Dakota, South Dakota, Minnesota, and Iowa, where wetland habitat is critical to ducks and other migratory birds.) In Prairie Pothole States, WC incentives are strong. When the compliance incentive includes premium subsidies, an estimated 75 percent (2.6 million acres) of potentially convertible wetland is on farms where Compliance incentives (farm program benefits) are clearly large enough to offset revenue lost by not draining these lands for crop production. Severing the link between WC and crop insurance premium subsidies (while continuing the link between Compliance and other 2014 Farm Act programs) would reduce the number of potentially convertible wetlands with strong protection by 15 percent (from 2.6 to 2.2 million acres). This chart appears in the July 2017 report, Conservation Compliance: How Farmer Incentives Are Changing in the Crop Insurance Era.