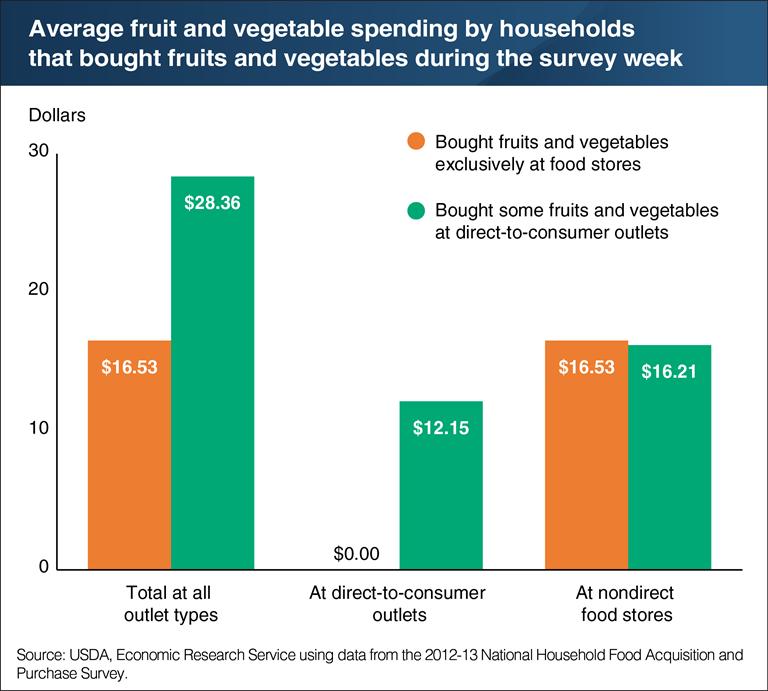 ERS researchers recently used USDA’s National Household Food Acquisition and Purchase Survey (FoodAPS) data to investigate the relationship between spending for fruits and vegetables and shopping at farmers’ markets, roadside stands, and other direct-to-consumer (DTC) outlets. The researchers looked at two groups of households—those that bought fresh and processed fruits and vegetables exclusively at nondirect food stores and those that purchased these foods at both DTC outlets and stores. Households that bought fruits and vegetables directly from farmers spent an average of $12.15 per week at DTC outlets on these foods. They spent another $16.21 on fruits and vegetables at food stores, about as much as households that bought fruits and vegetables exclusively at stores. The study measured the impact that buying directly from farmers has on a household’s overall fruit and vegetable expenditures and found evidence of a positive impact, even after controlling for other demand determinants like income, education, and a household’s attitudes toward food and nutrition. The data for this chart are from the ERS report, The Relationship Between Patronizing Direct-to-Consumer Outlets and a Household’s Demand for Fruits and Vegetables, released on January 24, 2018.