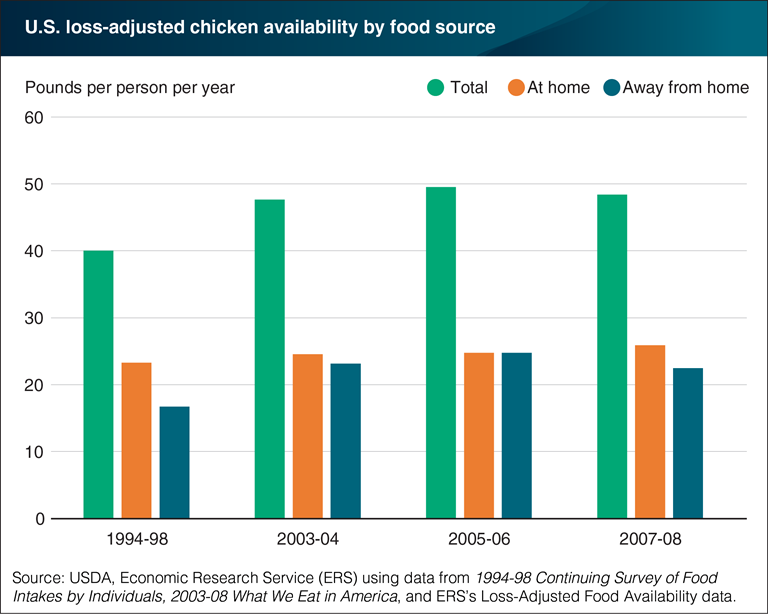 Per person chicken consumption in the United States more than doubled over the past four decades. Linking ERS’s loss-adjusted food availability data with food intake surveys from 1994-2008 reveals that the away-from-home market, which includes restaurants with wait staff, fast food places, school cafeterias, and other eating out places, drove much of the growth in U.S. chicken consumption over the 1994-2008 period. The share of total chicken consumption prepared by away-from-home eating out places rose from 41.9 percent during 1994-98 to 46.4 percent during 2007-08. Loss-adjusted chicken availability per person in the away-from-home market was 16.8 pounds in 1994-98 and rose to the range of 22.5 to 24.8 pounds during 2005-08. In contrast, chicken obtained at grocery stores (the food-at-home market) grew by just 2.6 pounds per person from 23.3 to 25.9 pounds. The greater growth in chicken consumption away from home is consistent with the introduction of chicken nuggets, chicken strips, and grilled chicken sandwiches and their rising popularity in fast food and other eating out places. This chart appears in the ERS report U.S. Food Commodity Availability by Food Source, 1994-2008, released on December 28, 2016.