Use of crop insurance on U.S. farms continues to grow 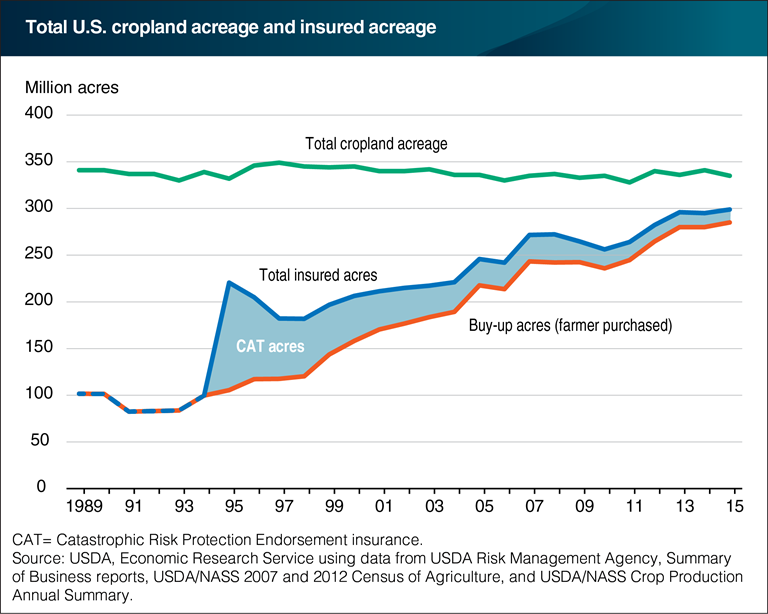 The share of U.S. cropland insured has increased from less than 30 percent in the early 1990s to nearly 90 percent—299 million acres—in 2015. Passage of the Federal Crop Insurance Reform Act in 1994 led to a spike in the use of crop insurance, reflecting the introduction of low-coverage, fully subsidized Catastrophic Risk Protection Endorsement (CAT) insurance and a temporary requirement that producers obtain insurance coverage to be eligible for other commodity support programs. CAT insurance pays only 55 percent of the price of the commodity on crop losses in excess of 50 percent, and farmers have increasingly opted to purchase insurance with higher coverage levels—known as “buy-up” insurance—for greater protection against risk. Premiums for buy-up policies are also subsidized, and these subsidies were increased in the 1994 Act as well as under the Agricultural Risk Protection Act of 2000. While buy-up policies are not fully subsidized like CAT insurance—in 2015 producers paid, on average, 38 percent of the total cost of buy-up policies—they in some cases can protect more than 75 percent of the value of a crop. By 2015, buy-up policies covered 95 percent of insured cropland. This chart is from the ERS report, How Do Time and Money Affect Agricultural Insurance Uptake? A New Approach to Farm Risk Management Analysis, released on August 1, 2016.