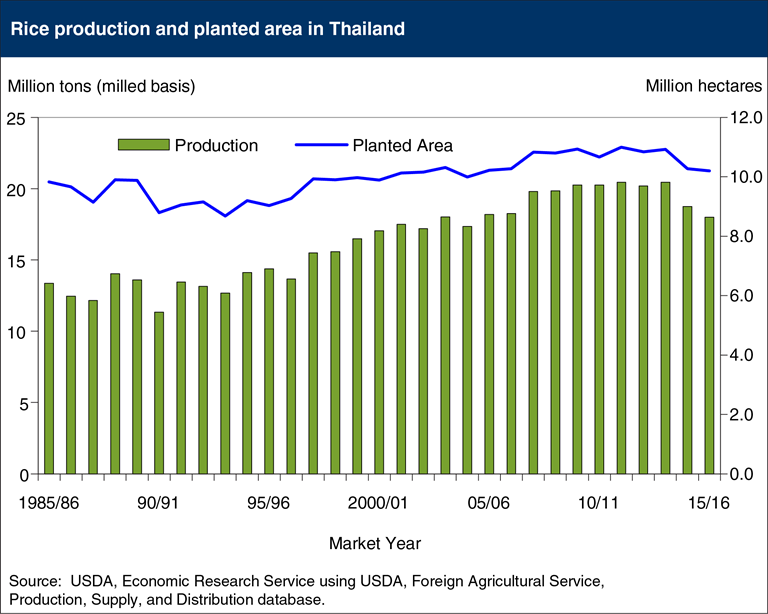 Thailand’s 2015/16 rice production (January/December marketing year) is forecast down 4 percent from last year and will be the lowest since 2004/05. The production decline is due to a second consecutive year of drought and resulting low reservoir levels. Planted area is forecast to fall to 10.2 million hectares for 2015/16, down from 10.92 million in 2013/14, before the current drought began; yields have dropped as well. The USDA area forecast was lowered in August based on Government statements informing growers that they will receive only 50 percent of normal dry-season irrigation water due to the low reservoir levels. In addition to less-than-adequate rainfall in 2014, less-than-normal rainfall at the beginning of the 2015 monsoon season in the central growing region in May and June also contributed to the low reservoir levels. This is the second consecutive year of a drought-reduced rice crop in Thailand. Thailand is typically the largest or near-largest rice exporting country, but exports for the 2015 calendar year are forecast about 18 percent below last year. Exports are forecast to rebound in 2016, but continued low reservoir levels and limited availability of irrigation water could impact the upcoming crop and export prospects. This chart is from the August 2015 Rice Outlook report