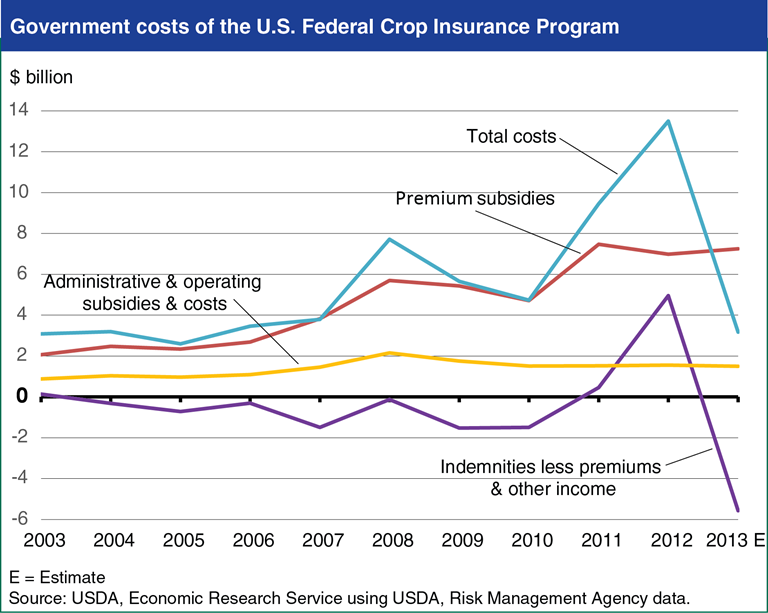 The Federal Crop Insurance (FCI) program is the primary USDA program to help farmers manage risks of crop losses. The size and cost of the FCI has grown since the early 2000s; insured acreage expanded by almost 90,000 acres from 2000 to 2013—about a 45 percent increase—in large part due to higher subsidies introduced in the 2000 Agricultural Risk Protection Act (ARPA) and the 2008 Farm Act. Higher insured acreage, increased subsidy rates—especially for the more costly coverage levels—and higher crop prices have combined to boost the price of insurance premiums in recent years. The major costs of the FCI program—premium subsidies and loss claims (which can vary greatly from year to year)—are tied to the value of premiums. In 2012, the widespread U.S. drought led to a large increase in the government share of indemnities due to crop losses. Under the current premium subsidy structure, an average of 62 percent of total premiums is paid by the Federal Government on behalf of insured producers in 2013. Administrative and operating subsidies, which include subsidies paid to insurance companies for selling and servicing insurance policies, are relatively stable over time, but have increased from an average of $0.96 billion in 2003-05 to about $1.52 billion in 2011-13. Find this chart and additional information on the Risk Management topic pages.