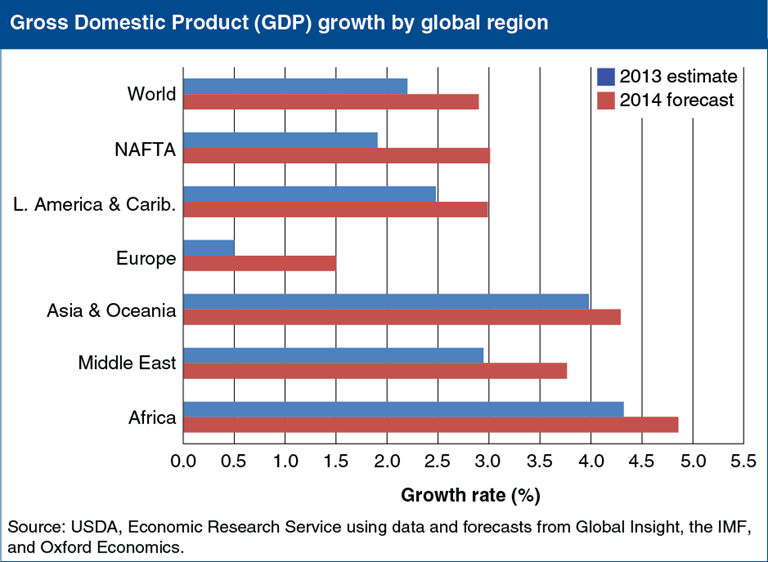 Annual world real economic growth is expected to rise from 2.2 percent in 2013 to 2.9 percent in 2014, maintaining a strong global demand outlook for U.S. agricultural trade. All global regions are forecast to show stronger real GDP growth in 2014. Growth in Asia, which includes China—the largest U.S. export market in 2013—as well as a number of large and emerging U.S. markets, is forecast to rise to 4.3 percent in 2014. Asian growth is expected to be sustained primarily by domestic consumer demand, housing growth due to easier credit, and higher infrastructure spending. Growth in the North America Free Trade Agreement (NAFTA) region, which includes the second and third largest U.S. markets in 2013—Canada and Mexico—is expected to strengthen to 3 percent in 2014. In the NAFTA region, continued U.S. recovery is expected to drive higher regional growth in 2014, with real GDP growth in Mexico expected to reach 4 percent. European economies are forecast to recover in 2014 and, along with faster U.S. growth, are expected to strengthen trade and growth prospects for economies in the Middle East and Africa. Key risks to the outlook include the potential for inflationary pressures leading to more restrictive monetary and fiscal policies and slower growth in several emerging markets, as well the potential for slower financial recovery, credit expansion, and growth in the Euro zone countries. This chart is based on data found in the Outlook for U.S. Agricultural Trade: August 2013.