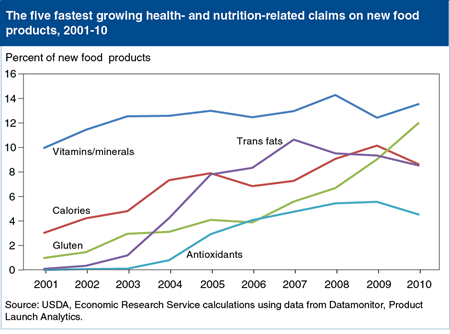 Over 7,000 new food and beverage products (including reformulated ones) appeared on grocery store shelves in 2010, and 3,134 of them carried health- and nutrition-related claims, such as “low sugar” or “high fiber,” on their packages. Claims related to gluten, trans fats, and calories were among those with the biggest increases over 2001-10. In 2010, 12 percent of new products claimed to be “gluten free,” up from 1 percent in 2001. Increases in claims related to calories, fiber, and sugar marked a reversal from previous trends during the 1990s. For example, the percent of new products showcasing their fiber contents, which had been falling since 1989, began to increase in 1998. Greater emphasis on health and nutrient claims likely reflects consumer interest in nutrition and obesity stemming from increased coverage of these topics by public and private sources and the media. The statistics for this chart are from the ERS report, Introduction of New Food Products With Voluntary Health- and Nutrition-Related Claims, 1989-2010, February 2013.