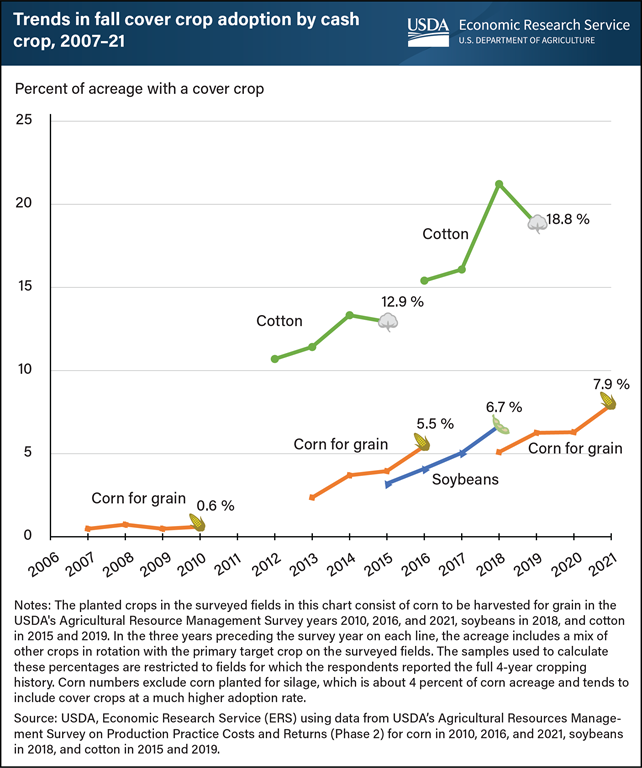 Cover crops are an increasingly popular management practice that farmers use to provide seasonal living cover between their primary commodity cash crops. Farmers often plant cover crops in the fall to provide winter cover for soil that otherwise would be bare. Over the past decade, fall cover crop adoption has grown in the United States, according to data from USDA’s Agricultural Resource Management Survey (ARMS). On fields growing corn for grain, one of the most commonly grown commodity crops, 0.6 percent of the acreage used a fall cover crop before the 2010 crop. By 2016, 5.5 percent of corn-for-grain acreage had a preceding fall cover, and by 2021, 7.9 percent of corn-for-grain acreage followed a fall cover crop. This represents a 44-percent increase in fall cover crop adoption on corn-for-grain fields between 2016 and 2021. The growth in adoption of cover crops on cotton fields is similar, with a 46-percent increase between 2015 and 2019. The ARMS surveys asked farmers to report on the cropping history, including the history of cover crop use, for each selected field. The average within-survey growth in cover crop adoption was similar for each target crop, as evident in the average year-over-year changes. A version of this chart appeared in the USDA, Economic Research Service report Cover Crop Trends, Programs, and Practices in the United States, released in February 2021. This chart adds data for 2019 cotton and 2021 corn-for-grain fields.