Cranberry production in top-producing States to increase modestly in 2021 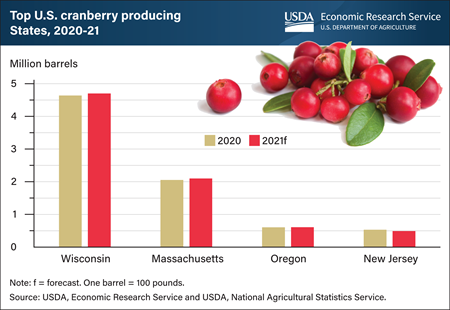 The U.S. harvest season for cranberries runs from around mid-September until the end of October, just in time for Thanksgiving. Total U.S. production of cranberries in 2021 is forecast for 7.9 million barrels, up less than 1 percent from last year. In three of the four top cranberry-producing States—Wisconsin, Massachusetts, and Oregon—output is expected to increase slightly from last year. Wisconsin, the largest producer of cranberries in the United States, grew roughly 59 percent of the crop in 2020. Production in this State is expected to increase 1 percent from 2020 to 4.7 million barrels in 2021. In Massachusetts and Oregon, production volumes are forecast at 2.1 and 0.6 million barrels, respectively, representing slight net increases. In contrast, 2021 output is forecast to decrease in New Jersey; however, this decline is more than offset by gains in other States. Production of cranberries has gradually increased since 1990 as consumption has expanded from seasonal to year-round. This increase is driven in part by the rise in cranberries used in processing (mainly for juice and juice blends). This chart is drawn from Economic Research Service’s Fruit and Tree Nut Outlook, September 2021.