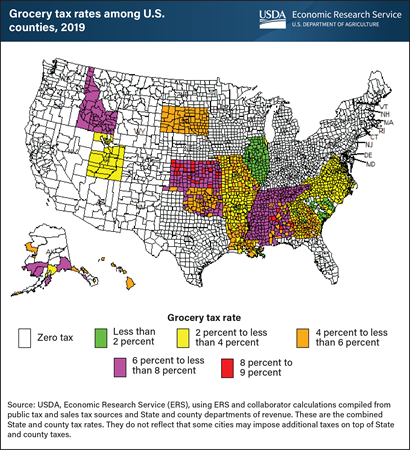 Foods purchased at grocery stores, supercenters, and other retail venues were exempt from sales taxes in 57 percent of U.S. counties in 2019. The remaining counties taxed food purchases at various levels across 18 states, mostly in the Southeast and Midwest. Alabama’s Tuscaloosa and Cullman counties had the highest grocery tax rate at 9 percent (4 percent State plus 5 percent county). Grocery tax rates not only vary across different States, counties, and cities, but they can also change over time. Using county-level tax data in combination with the USDA’s National Household Food Acquisition and Purchase Survey (FoodAPS), researchers at USDA, Economic Research Service (ERS) recently examined whether grocery taxes are associated with how much money U.S. households spend for food at retail outlets and restaurants. ERS found that grocery taxes were associated with differences in food spending among lower-income households that were eligible for the Supplemental Nutrition Assistance Program (SNAP) but did not participate in it. Among those households, researchers were able to associate taxes on groceries with reduced food spending at retail stores and increased food spending at restaurants. However, Federal law and USDA regulations stipulate that foods purchased with SNAP benefits are exempt from State and local sales taxes, and no such relationship was found among households participating in SNAP. This chart is drawn from the ERS report Food Taxes and Their Impacts on Food Spending, released September 2021.