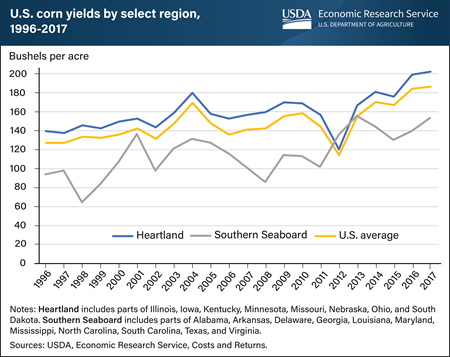 The Commodity Costs and Returns Team of USDA’s Economic Research Service (ERS) has tracked changes in U.S. corn production and corn yields over the last several decades. The team uses Agricultural Resource Management Survey commodity surveys, which are conducted every 4 to 6 years, coupled with annual updates based on USDA, National Agricultural Statistics Service data. Using these data sources, the team found that between 1996 and 2017, the U.S. average corn yield increased 42 percent, from 130 bushels an acre in 1996 to 185 bushels an acre in 2017. While the team observed steady yield growth across all regions during the study period, yield growth was highest in the Heartland (an average of 201 bushels an acre in 2017) and lowest in the Southern Seaboard (an average yield of 152 bushels an acre in 2017). Technological advances for seeds and precision farming have supported yield increases over the past 20 years. The use of genetically engineered corn seed rose from 2 percent of acres in 1996 to 92 percent of corn planted area in 2017. Genetically engineered corn seed includes resistance to damage from insects, herbicides, fungal diseases, or drought. The widespread adoption of precision-farming technologies such as yield monitors and maps, variable-rate applicators, and guidance systems has allowed farmers to adjust their practices within fields, which also has supported yield growth. This chart also appears in the ERS report Trends in Production Practices and Costs of the U.S. Corn Sector.