Rye and winter wheat were the most common cover crops on corn, soybean, and cotton fields 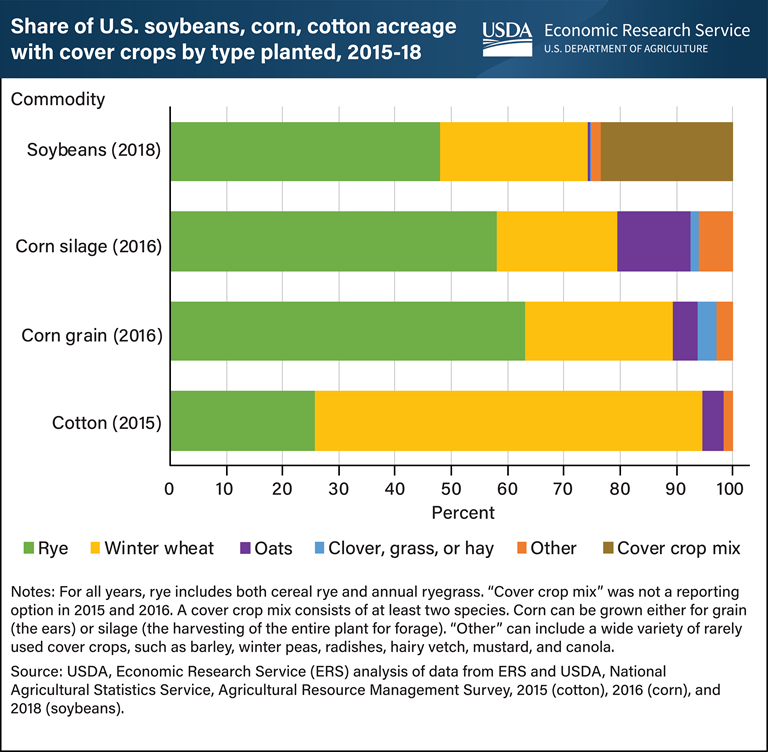 Cover crops—which farmers add to a crop rotation in between the planting of two crops—provide living, seasonal soil cover with a variety of benefits, such as increased soil moisture capacity, weed suppression, and reduced nutrient runoff. Researchers from USDA, Economic Research Service (ERS) reported which cover crops were grown the fall before planting corn, cotton, and soybeans. For corn fields intended for use as grain or silage (the harvesting of the entire plant for forage) in 2016, more than 90 percent of acres with cover crops used a grass or small grain cover crop, such as rye, winter wheat, or oats. At 63 percent of acreage, rye was more than twice as common as winter wheat (26 percent) as the cover crop on corn for grain fields. Rye and winter wheat were also the most common cover crops on soybean fields in 2018. Winter wheat was the most common cover crop used on cotton fields in 2015. This likely reflects the role of wheat stubble in protecting cotton seedlings from wind and the potentially negative impact of certain chemicals produced by cereal rye on growing cotton plants. This chart appears in the ERS report Cover Crop Trends, Programs, and Practices in the United States, released in February 2021. It also appears in the July 2021 Amber Waves finding Grass Cover Crops, Such as Rye and Winter Wheat, Were the Most Common Cover Crops Used Before Planting Corn, Soybeans, and Cotton.