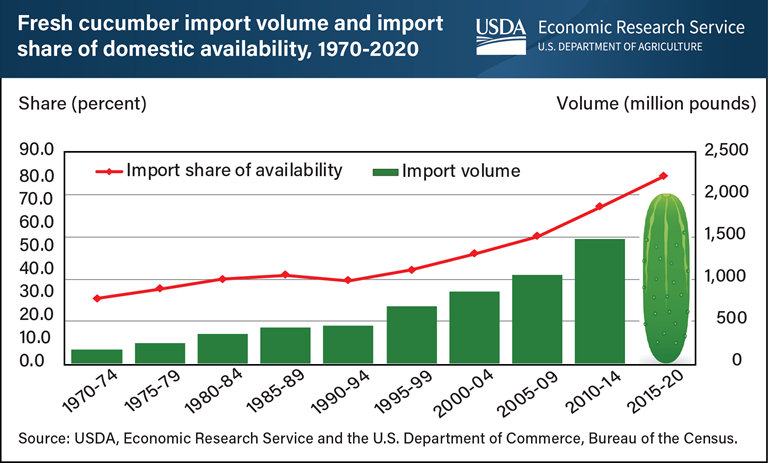 Driven largely by the increasing popularity of salads and “mini” or snacking varieties, U.S. demand for fresh cucumbers has been on an upward trend since the 1970s. Reflecting rising consumer demand, import volume has continued on a 50-year upward trend, contributing to the crowding-out of domestic field-grown production (down 62 percent since 2010). Before 2005, domestic fresh cucumber production exceeded the amount imported each year. Imports grew from a 35 percent share of availability in 1990-94 to 80 percent in 2015-20. By 2020, imports accounted for almost 90 percent of the domestic market. The share of imports in the U.S. fresh cucumber market continues to trend higher because of year-round demand for cucumbers and for varieties that tend to be cultivated in greenhouses. Imported cucumbers typically enter the United States during the winter, autumn, and early spring months when domestic supplies are limited. Fresh cucumber imports, largely from Mexico and Canada, totaled nearly 2.2 billion pounds in 2020, and 18 percent of imported cucumbers were grown in protected structures such as greenhouses. To a lesser extent, increased domestic greenhouse production, which now accounts for about 11 percent of U.S.-grown cucumbers, has siphoned off demand for field grown fresh cucumbers over the past two decades. This chart appeared in the Economic Research Service’s April 2021 Vegetable and Pulses Outlook.