Soybean oil is the most widely used vegetable oil in the United States, accounting for more than 50 percent of all domestic vegetable oil use. It can be found in food products such as baked goods, snacks, cooking oils, mayonnaise, salad dressings, and processed frozen foods. It also is used to produce inedible products such as caulk, plastic, resin, and, increasingly, biofuels—agriculturally based transportation fuels. Soybean oil’s popularity in large part can be attributed to its status as the most widely grown U.S. oil crop. Its use as a feedstock in the production of biofuels has sparked increased domestic demand for a product that can help transportation fuel producers meet mandated renewable fuel obligations.

In addition, lower international supplies of alternative vegetable oils fostered competition for soybean oil in the global market. Several factors contributed to decreased supplies of these oils, including drought in Canada and the U.S. Northern Plains, conflict between Russia and Ukraine, and migrant labor issues in Indonesia and Malaysia. Reduced supplies raised international vegetable oil prices. Consequently, U.S. soybean oil prices rose more than 50 percent in 2021 and continued to climb in 2022. During the past 30 years, average soybean oil prices hovered between 20 and 30 cents a pound. Prices started to rally in the spring of the 2020/21 marketing year. At the onset of the rally, prices of soybean oil in the Decatur, Illinois, market—the industry’s benchmark for U.S. soybean oil prices—averaged a record $0.73 per pound, nearly 30 percent higher than the previous year’s average price. This was eclipsed in May 2022 when prices reached $0.87 per pound, boosting the springtime average to $0.83 per pound. Food manufacturers paid higher prices for soybean oil and other fats and oils, eventually passing those increases on to consumers buying food in grocery stores and restaurants. In the October 2022 Food Price Outlook data set, USDA’s Economic Research Service forecast a 9.5 percent to 10.5 percent increase in the 2022 all-food Consumer Price Index (CPI)—a widely used measure of food inflation. Fats, and oils—accounting for 2 percent of the all-food CPI—showed a historically large price increase of 18 to 19 percent for 2022. Rising prices for other foods corresponded directly with higher fats and oils prices, including soybean oil.

Inflation is one factor in the soybean oil price changes, but it is not the only driver. Canada, Europe, Russia, and Ukraine, major suppliers of canola and sunflowerseed oil, produced lower-than-expected oilseed crops between 2019 and 2021. According to USDA estimates, global stocks fell to a relatively tight level for these major vegetable oils in 2020/21. The lower supply increased demand for soybean oil, contributing to the initial surge in soybean oil prices. This was further exacerbated by the conflict between Russia and Ukraine that started in February 2022, prompting market uncertainty about Ukrainian sunflowerseed oil supplies. This induced price volatility across the global vegetable oil market while simultaneously eliciting demand for alternative vegetable oils. Given the availability of soybean oil and its many practical uses, it was in high demand—ultimately contributing to price increases. Reduced soybean yields in South America in spring 2022 extended the price run-up.

Historically, domestic demand for soybean oil as an ingredient for food, animal feed, and other industrial uses has increased steadily in tandem with U.S. population growth. More recently, State and Federal policies have encouraged use of various biomass feedstocks, namely soybean oil, in fuel production to reduce greenhouse gas emissions. This has resulted in significant changes in the two distinct categories of domestic soybean oil usage—what the agricultural industry refers to “domestic disappearance”—in (1) food, feed, and other industrial uses and (2) biofuel use. Domestic disappearance is calculated using the official production and stocks data reported by USDA’s National Agricultural Statistics Service and trade data reported by the U.S. Department of Commerce.

Domestic soybean oil disappearance grew almost 9 billion pounds between marketing years 2009/10 and 2021/22, and biofuels accounted for 96 percent of that growth. By the end of the 2021/22 marketing year, the United States used an estimated 10.4 billion pounds of soybean oil for biofuels. This reduced the share of domestic soybean oil disappearance for the food, feed, and other industrial use category. During the past decade, the international market drew off about 10 percent of soybean oil supplies from the United States, the world’s third-largest exporter of soybean oil. However, increased domestic demand and a strong U.S. dollar have made soybean oil supplies from other countries more attractive. 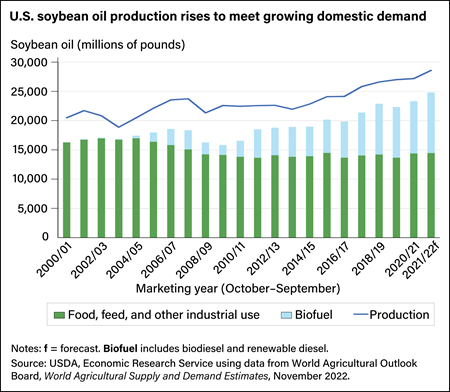 The use of soybean oil to produce biofuel grew when the Renewable Fuel Standard (RFS) was established in 2005 and later amended in the Energy Independence and Security Act of 2007. The Renewable Fuel Standard requires specified volumes of renewable fuel to replace or reduce the quantity of petroleum-based transportation fuel, heating oil, or jet fuel to reduce greenhouse gas emissions. In 2011, California was the first State to implement a renewable fuel program, the Low Carbon Fuel Standard (LCFS). Domestic demand for soybean oil used for biofuel production typically lags the inception of renewable fuel programs because of the time needed to build and adapt the production infrastructure to specific requirements. However, the California program included incentives that supported its swift adoption. The U.S. Energy Information Administration reported that 10.4 billion pounds of soybean oil was used in the production of biofuels in 2021/22, accounting for 42 percent of total domestic use. 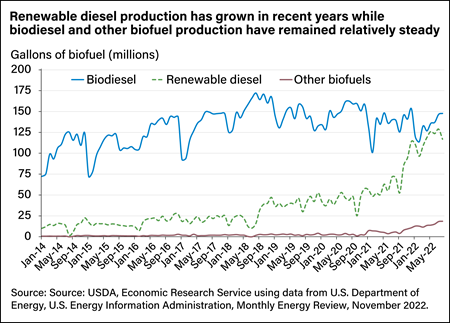 U.S. soybean oil supplies—including current crop output, imports, and the remaining supplies from the previous marketing year—are estimated to reached 28.6 billion pounds in the 2021/22 marketing year. This would be the highest soybean oil-producing year on record, contributing to a 1.4-billion-pound supply increase from the previous year, and would more than cover total domestic soybean oil needs at current usage rates.

Over the past 20 years, U.S. soybean oil production increased 7.2 billion pounds to 26.1 billion in 2021/22. The rise in production has not just been a result of an increase in the volume of soybeans being “crushed” into soybean oil. More soybean oil is also being extracted from a bushel of soybeans, reaching a record high of 11.84 pounds per bushel in 2021/22. Future U.S. supplies of soybean oil will largely depend on expanding the capacity of the U.S. soybean crushing industry. Likewise, demand for soybean meal, the main product of processing soybeans, will need to economically support increases in capacity. Higher soybean oil prices may improve the profitability of soybean processing in the near term; however, an excess supply of meal may cut into profits. These constraints, spurred by growing domestic and international demand, could deter additional capital investments to expand renewable diesel plant capacity.

Soybean oil has broad applications across many industries, so the market is dynamic. However, prices can affect demand. In general, high domestic prices deter exports and incentivize imports of alternative vegetable oils. However, in 2021/22, the dynamics of the global oilseed complex lifted all international vegetable oil prices. Imports of major alternative vegetable oils—particularly canola and palm oils—have steadily increased and are estimated to reach a combined total of 7.9 billion pounds in 2021/22. High prices also encourage more efficient use of other feedstock sources, such as used cooking oils, and can even cause some users to reduce consumption of soybean oil.