After Congress passed the Food Safety Modernization Act (FSMA) in 2011, the U.S. Food and Drug Administration (FDA) created rules to better prevent the spread of foodborne illness. The rules pertain to nearly every aspect of the food supply chain: food as it is grown, harvested, and packed on farms; food as it is processed after harvest; and food stored, transported, and handled by distributors and retailers. Two of those rules are the Preventive Controls Rule, which covers facilities that process commodities into different products, and the Produce Safety Rule, which covers farms that grow fruits or vegetables and may also perform post-harvest activities such as sorting, washing, or packing. For produce, the supply chain is made up of a diverse variety of operations, some of which were more prepared for the new food safety rules than others.

To evaluate the fresh produce industry’s preparedness for the new rules prior to implementation, USDA, Economic Research Service (ERS) researchers conducted a survey of fresh produce post-harvest operations with USDA, National Agricultural Statistics Service in 2015. The Preventive Controls Rule went into effect in 2016, and the Produce Safety Rule was implemented in 2017. ERS researchers used the survey to describe FSMA readiness among five types of U.S. operations that handle post-harvest fresh produce.

Different post-harvest activities carry different risks of introducing microbial contamination that can lead to foodborne illness such as Salmonella or Listeria. The more stringent Preventive Controls Rule primarily covers operations that conduct higher risk activities, such as cutting or processing. ERS researchers categorized those operations as non-farm facilities if they did not grow fruits or vegetables or farm mixed-type facilities if they grew produce in addition to their processing activities. The ERS survey showed that a higher proportion (55 percent) of non-farm facilities performed selected food-safety practices required by the Preventive Controls Rule than farm mixed-type facilities (38 percent). That suggests the non-farm facilities may have done more to meet the standards in the rule. Researchers also found that many operations handling fresh fruits and vegetables in the U.S. supply chain in 2015 reported they already used food-safety practices required by FSMA.

Finally, farms that grow and package their own fruits and vegetables were categorized as primary production farms and are covered by the Produce Safety Rule. Even though they were not legally required to do so in 2015, 46 percent of these farms performed selected food-safety practices that would later be required by the Preventive Controls Rule. 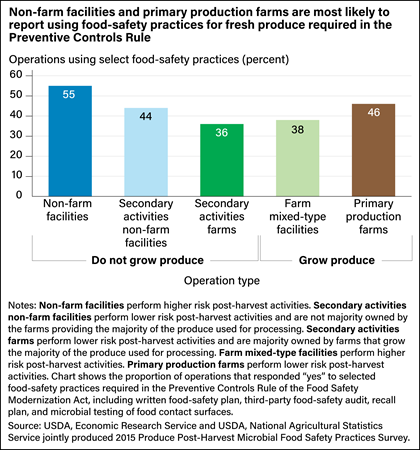