Super stores are large stores such as Walmart or Target that sell a wide variety of foods, along with other consumer goods, often at lower prices than other stores. Since 2006, super stores received more SNAP redemptions than any other type of store.

Shopping at super stores can enable consumers to buy more food or to improve the quality of the foods they buy, which results in an expansion of the purchasing power of SNAP benefits for program participants. However, the resulting loss of SNAP redemptions at supermarkets and other stores reduces revenue for those stores and could force some of them to exit food retailing, which would reduce the availability of SNAP-approved stores.

The ERS researchers estimated that from 1994 to 2005, supermarkets and other smaller food retailers annually lost $191,000 in SNAP redemptions for each super store entrant into the local market. That loss increased to $213,000 over 2005-15. Supermarkets experienced about 90 percent of the SNAP redemption loss, estimates showed.

Assuming a savings of 3 percent on food bought with SNAP benefits, the researchers estimated that a shift by SNAP participants to super stores expanded the purchasing power of their benefits by $108.6 million in 2015 (0.15 percent of total SNAP benefits and costs in 2015). SNAP is designed to be a supplemental program, so participants use their own money for food purchases as well as the benefits provided. Therefore, the overall reduction in food costs for SNAP participants from shifting to super stores amounts to more than the increased purchasing power of SNAP benefits alone. 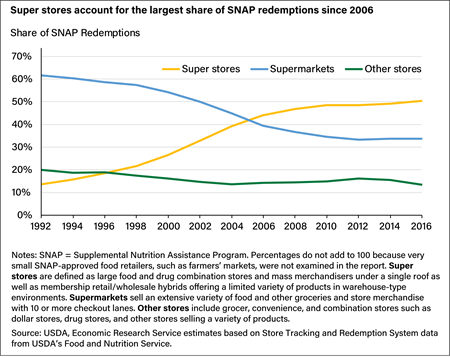