USDA releases a monthly report, World Agricultural Supply and Demand Estimates (WASDE), that provides estimates and projections for production and use of major agricultural commodities. Previous studies have found that the WASDE report influences futures markets on the day of the WASDE release and up to several days after. Futures markets trade contracts for the purchase or sale of a commodity at a given price on a future date and offer farmers and other participants in commodity markets a risk management tool with which they can lock in a price for crops to be delivered after harvest, even if the actual price for the commodity is lower at that time.

Researchers from USDA’s Economic Research Service examined the impact of a key variable in the WASDE report—the projection of annual corn production—on the price of corn futures. The study determined that those projections are a key factor in the response of the corn futures market to the WASDE release with the magnitude of influence varying across the calendar year. USDA estimates of annual U.S. corn production begin in May and continue through the end of harvest, typically in September or October. For most of the United States, May is the key month for planting corn and is also the month when market watchers receive the first information about the potential size of that year’s crop through the WASDE forecast. In August and September, harvest begins in major corn-producing regions, and by October, USDA analysts have definitive harvest numbers.

WASDE production forecasts released in May and June are largely based on the Prospective Plantings report released by USDA’s National Agricultural Statistics Service (NASS) in late March. With planting just getting under way in May, the WASDE forecasts for those 2 months often are similar. In July, however, projections consider NASS’ end-of-June Acreage report and weather data that shape yield expectations. The reports for the 2 later-season months, August and September, reflect the NASS’s own production forecasts, which begin to be released in August as harvest data become available. Throughout the growing season, analysts continually update forecasts with NASS data, weather reports, satellite imagery, and models. 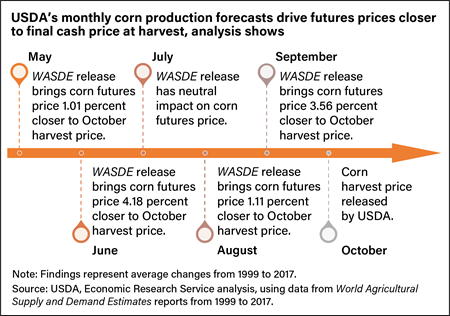