by Hayden Stewart and Diansheng Dong

State and local governments typically levy a sales tax on purchases of clothes, computers, automobiles, and other products. Foods purchased at grocery stores, supercenters, and other retail venues are exempt from these sales taxes in 32 States and Washington, D.C. States and counties that tax food at home (FAH) are mostly in the Southeast and Midwest, such as Alabama, Arkansas, Kansas, Mississippi, Missouri, and South Dakota. The grocery tax rates across these States and counties range from less than 2 percent to more than 8 percent. State and local governments widely tax restaurant foods and other types of food away from home (FAFH) at an equal or higher rate than their general sales tax rate.

Using county-level sales tax data in combination with the USDA’s National Household Food Acquisition and Purchase Survey (FoodAPS), researchers from USDA, Economic Research Service (ERS) and several universities examined the association between food taxes and household food spending. Food taxes can affect a household’s relative costs for eating at home versus dining out, which may ultimately have unintended implications for individuals’ caloric intake and overall diet quality. Research shows that, on average, restaurant meals and snacks often are more calorie-dense and can be nutritionally poorer (often lower in fiber, calcium, and iron) than foods prepared at home.

The data showed that restaurant and grocery taxes can affect how consumers spend their food dollars. However, U.S. households are diverse; they do not all react to food taxes in the same way. Grocery taxes are associated with reduced FAH spending among lower income households that are eligible for USDA’s Supplemental Nutrition Assistance Program (SNAP) but do not participate in the program. These households tend to spend a smaller share of their overall food budgets at grocery stores, supercenters, and other retail food venues when faced with a grocery tax. For example, a 1-percentage-point increase in grocery taxes from 3 to 4 percent (33-percent increase) is associated with a 0.7-percent reduction in FAH spending among SNAP-eligible, non-participants.

Federal law and USDA regulations stipulate that any foods purchased with SNAP benefits are exempt from State and local sales taxes, and researchers did not find a significant link between grocery taxes and FAH spending among households that participate in SNAP.

No significant relationship was detected between restaurant taxes and FAH spending among households eligible for SNAP that do not participate in the program. 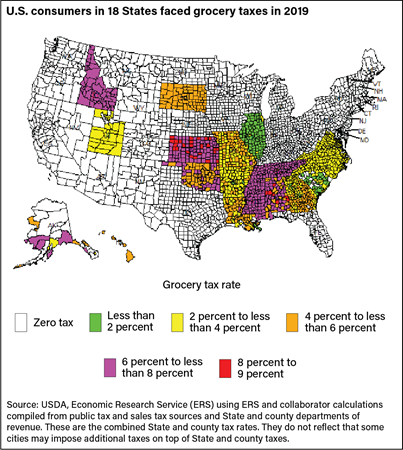 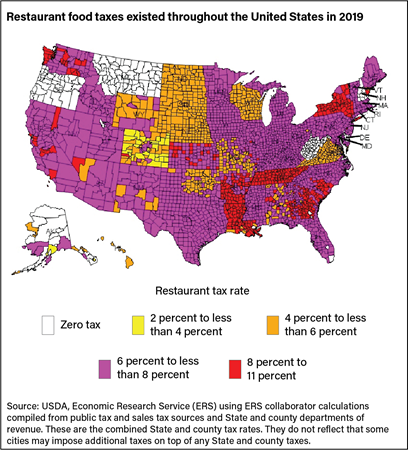 Food Taxes and Their Impacts on Food Spending, by Diansheng Dong and Hayden Stewart, ERS, September 2021

Nutritional Quality of Food Prepared at Home and Away From Home, 1977-2008, by Biing-Hwan Lin and Joanne Guthrie, USDA, Economic Research Service, December 2012