Use of Genetically Engineered Cotton Has Shifted Toward Stacked Seed Traits

GE crops are broadly classified as herbicide-tolerant (HT), insect-resistant (Bt), or “stacked” varieties that combine HT and Bt traits. HT crops can tolerate one or more herbicides and provide farmers with a broad variety of options for effective weed control by targeting weeds without damaging crops. Bt crops contain genes from the soil bacterium Bacillus thuringiensis and provide effective control of insect pests, such as the tobacco budworm and pink bollworm. Although other GE traits have been developed (such as virus and fungus resistance, drought resistance, and enhanced protein, oil, or vitamin content), HT and Bt traits are the most commonly used traits in U.S. crop production.

Growers have transitioned to stacked seeds for many reasons, including the wider availability of stacked products for growers. The first stacked seed traits, introduced in the late 1990s, added Bt traits to existing HT seeds. Since then, weed management has become more complex with the emergence of herbicide-resistant weed species and Bt-resistant pests. Stacked seeds with multiple traits allow farmers to pursue many different options for pest management, such as resistance to multiple herbicides—including glyphosate, glufosinate, and dicamba. 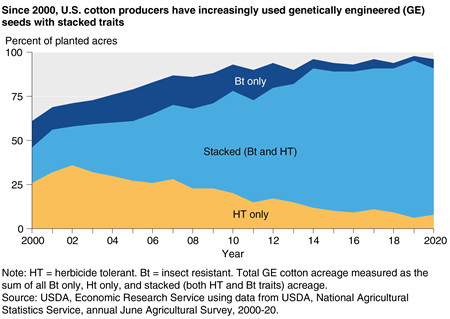