SNAP Redemptions Contributed to Employment During the Great Recession

by John Pender and Young Jo

USDA’s Supplemental Nutrition Assistance Program (SNAP), previously called the Food Stamp Program, is the largest U.S. Department of Agriculture (USDA) program. During fiscal year 2014, the last year covered by this study, it provided benefits to an average of more than 46 million recipients per month and accounted for 52 percent of USDA’s spending. In 2014, SNAP recipients redeemed more than $69 billion worth of benefits at SNAP-authorized stores, 83 percent of which were located in urban (metro) areas and 17 percent in rural (nonmetro) areas. Between fiscal years 2000 and 2013, average monthly SNAP participation nearly tripled, while the inflation-adjusted value of benefits paid under the program nearly quadrupled.

The growth in program participation and the value of benefits paid was particularly rapid during and immediately after the Great Recession, which officially began in December 2007 and ended in June 2009. However, the recession resulted in high unemployment and poverty rates well after it officially ended. The increase in program spending was due to rising SNAP participation in response to rising levels of unemployment and poverty during this period and to an increase in benefit rates mandated by the American Recovery and Reinvestment Act (ARRA) in early 2009. SNAP redemptions were particularly large in high-poverty rural areas in Appalachia, the Mississippi Delta, the Southeast, and parts of the Southwest and Northwest. 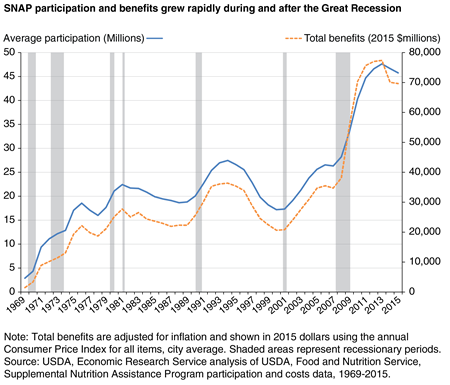 Although the increase in SNAP benefit payments mandated by the ARRA was predicted by some analysts to have large impacts on economic growth and employment, no published research has investigated these effects after the fact using statistical methods. To investigate these effects, ERS researchers analyzed the statistical associations between changes in SNAP redemptions (the value of SNAP benefits redeemed by SNAP-authorized stores) and changes in employment using county-level data, after statistically accounting for other factors that potentially affect employment changes. The analysis investigated these relationships during and immediately after the Great Recession (2008–10), as well as during the 7 years prior (2001–07) and the 4 years after (2011–14). These analyses were conducted separately for urban and rural counties.

The effects of SNAP payments on employment were expected to be greater during the recession than either before or after, by stimulating demand for goods and services at a time of excess capacity in the economy. It was also expected that the effects of SNAP payments may differ between urban and rural areas due to greater SNAP participation in rural areas, greater dependence of rural economies on employment in the food and agricultural sector, and other differences.

The findings that SNAP spending had a positive effect on employment during the recession—and small or negative effects when the economy was growing—are similar to findings from other studies that used a national economic simulation model to predict the effects of SNAP spending. However, ERS researchers found that SNAP spending had larger effects on employment during the recession than previous research had predicted.

The relatively large effect of SNAP on employment found during the recession may be due to the fact that SNAP payments are provided directly to low-income people who have a high propensity to spend additional income and do so quickly. By contrast, many other government programs provide funding indirectly through providers of services (such as Medicare and Medicaid), do not specifically target low-income people (this describes most programs), or may need a much longer time to show results (such as highway or other infrastructure improvements).