by Christian A. Gregory and Alisha Coleman-Jensen

ERS researchers recently used health, demographic, and food security information from the U.S. Centers for Disease Control and Prevention’s National Health Interview Survey to look closely at the relationship between 10 chronic diseases in low-income working-age adults and the food security status of their households. The researchers controlled for a variety of household and individual characteristics that may be associated with health—including income and health insurance—to get a clearer picture of the strength of the association between food security status and health.

Second, researchers found similar differences for all of the health conditions they examined—hypertension, coronary heart disease, hepatitis, stroke, cancer, asthma, diabetes, arthritis, chronic obstructive pulmonary disease, and kidney disease. In all cases, the likelihood of having the particular health condition increased as household food security worsened. Among the 5 most common of the 10 chronic diseases examined, predicted illness prevalences were 4.3 to 11.2 percentage points higher for adults in very low food-secure households compared with those in high food-secure households.

The results of this analysis point to the importance of efforts to reduce food insecurity in the United States. Of course, reducing food insecurity on its own will not relieve adults of their asthma or hypertension. But, such reductions could make such chronic diseases easier to manage or ameliorate their impact on well-being. 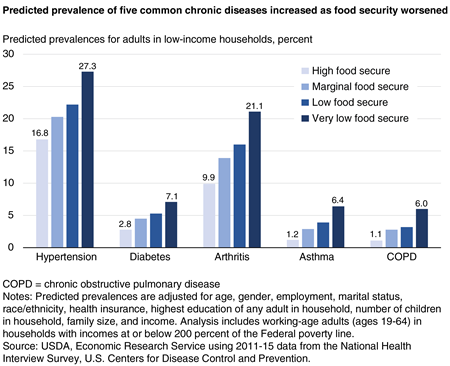