by Ron Durst and Robert Williams

Farm programs provide financial support for various reasons, including helping to maintain income stability for farmers. As with any financial support program, a challenge is designing programs that avoid payments going to participants with high income. While commodity program payment limits have been in effect since enactment of the Agricultural Act (Farm Act) of 1970, limits on eligibility for payments based on a program participant’s income were not introduced until 2002. The 2002 Farm Act supplemented the program payment limits with a cap on the income producers could earn and still receive payments. Under the 2002 Act, producers whose 3-year average adjusted gross income (AGI) exceeded $2.5 million were not eligible for payments. An exception was made if more than 75 percent of AGI was from agriculture. This initial income cap only affected a small number of farm program participants with very high levels of off-farm income. The 2008 Farm Act abandoned the aggregate AGI cap while establishing separate limits on the farm and off-farm income components of AGI. The 2014 Farm Act returned to an eligibility cap that determined payment eligibility based on a single AGI limit, as in 2002 but without an exemption for those with a high share of AGI from farm income. The cap applies to most commodity and conservation programs and payments but does not apply to premium subsidies received by farmers participating in the crop insurance program.

Because the income limitation is based on AGI, a tax-based measure of income—individual Federal income tax return data from the Internal Revenue Service (IRS)—is the preferred source of information to assess the implications of the income caps. However, the effectiveness of this approach is limited by data availability and the absence of tax return information with regard to the various types of farm program payments or Federal crop insurance premiums. ERS has used both published and special tabulation data obtained from the IRS as well as data from USDA’s Agricultural Resource Management Survey (ARMS) to evaluate the effect of income caps on program payment eligibility.

AGI is not comparable to net farm income or farm operator household income available from ARMS data. It is a tax-defined income measure that excludes a variety of tax-exempt income sources and includes various deductions not applicable to an economic measure of income such as the net farm income and farm household income measures from ARMS. However, given the information available from ARMS, a comparable AGI measure can be estimated and used to evaluate the 2008 and 2014 income caps.

The 2008 Farm Act imposed three separate limits on the farm and nonfarm components of AGI. A $500,000 nonfarm income cap restricted eligibility for direct, counter-cyclical, average crop revenue election, marketing loan gain, loan deficiency, noninsured crop assistance, milk income loss contract program, or disaster assistance payments or benefits. A $1 million cap affected eligibility for conservation payments, unless more than two-thirds of total average AGI was farm income. Also, the Secretary of Agriculture had the authority to waive the limitation on a case-by-case basis if it was determined that a portion of program payments received would go toward protecting environmentally sensitive land of special significance. Under the farm income cap, a person or legal entity with average AGI from farming that exceeded $750,000 was not eligible for direct payments.

The 2014 Farm Act restored a single total AGI limit of $900,000 applicable to most farm commodity and conservation program payments. Like the previous caps, eligibility is determined on the basis of a 3-year average, and income on a joint return can be allocated as if a separate return had been filed. This allows the farmer to exclude any earned income from a spouse as well as a share of any unearned income from jointly held assets for purposes of the eligibility cap. This provision has the potential to significantly reduce the share of farms affected by the caps and can be incorporated into the ARMS estimate of AGI. 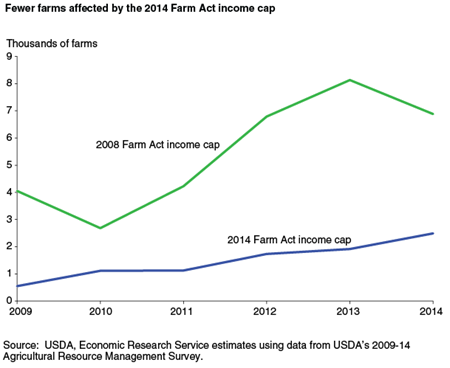 The Income Cap and the Crop Insurance Program

The 2014 Farm Act shifted emphasis and funding from farm programs to the crop insurance program. Under the current premium subsidy structure, around 62 percent of total Federal crop insurance premiums are paid by the Federal Government on behalf of insured producers. While extending the income cap to these crop insurance subsidies was considered during the debate prior to passage of the 2014 Farm Act, the final bill only extended the cap to the agricultural management assistance program available for farms in selected States under the Federal Crop Insurance Act. According to a recent Government Accountability Office report, concerns were raised that the elimination of subsidies for high-income participants could affect overall participation to the extent that it could damage the financial soundness of the entire program. However, estimates based on ARMS survey data suggest that in most years, less than 0.5 percent of farms and less than 1 percent of premiums would be affected by the $900,000 income cap if it were extended to crop insurance participation as well as to farm programs. Those farms potentially affected by the cap have significantly higher levels of farm, nonfarm, and total household income and also report out-of-pocket crop insurance premium payments nearly 3 times the amount reported by other farms participating in the Federal crop insurance program. 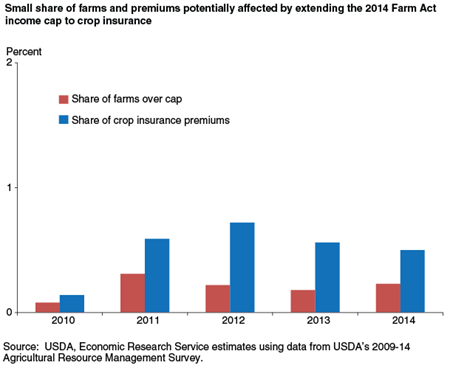