Expanding production and consumption of craft beer has created a need to update the methods used to estimate barley use for malting and brewing, which are collectively called “industrial” purposes. Previous approaches have relied on the historical relationship between malt and malt products (and therefore malt barley) use for lager-style beer production. However, the production of craft-style beer typically requires proportionally more malt per barrel than the same volume of the common American light-lager or “non-craft” beer.

A recent Brewers Association survey estimates that craft brewers use an average of 68.7 pounds of base malt and specialty malt per barrel, which is slightly more than four times the amount used for non-craft beer production. Other industry estimates peg per-barrel craft use at three to seven times that of non-craft use, creating upper and lower bound use estimates that can be compared over time. Differences in beer recipes, brewer experience and brewery efficiency contribute to observed variations between craft and non-craft malt and malt products usage. Brewer-specific malt and malt product needs also vary within the craft category, often as a function of consumer-driven recipe selection. For example, expanded popularity and production of India Pale Ale (IPA)-style craft beers, which require more malt per unit brewed when compared to the craft average, has the potential to boost per-barrel use. On the other hand, growing production of low-alcohol “session” style beers could have the opposite effect. In all cases, variable demand for malt and malt products is influenced by changing consumer taste and preferences and will ultimately impact demand for malt barley. 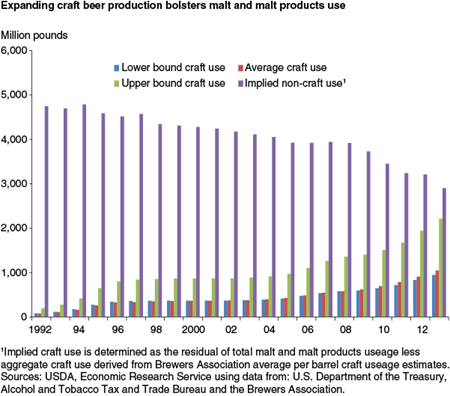