Editor's Pick 2015, #5:
Rural employment yet to recover to prerecession levels 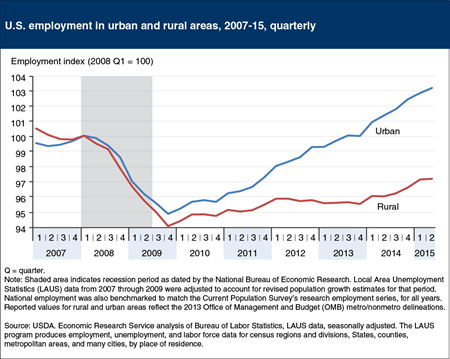 Employment fell by roughly 5 percent in urban areas and 6 percent in rural areas between the first quarter of 2008 and the fourth quarter of 2009—a period that includes the Great Recession. In 2010, the first full year of the economic recovery, urban and rural employment levels grew at comparable rates, and rural areas experienced modest growth the following year. This was followed by 2 years of near-zero employment change before growth resumed in early 2014. An annual growth of more than 1 percent between mid-2014 and mid-2015 has brought the number of employed rural residents (total rural employment) back above 20 million people for the first time since 2008. As of mid-2015, that number remained more than 3 percentage points below its prerecession peak in 2007. This chart is found in the 2015 edition of Rural America At A Glance, released November 30, 2015.