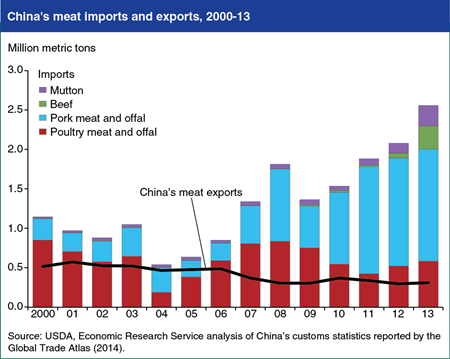 As China enters a new phase of its economic development, its demand for higher-valued products like meat and dairy products is growing rapidly. China’s imports of meats during 2013-14 were more than double the volume imported during the early 2000s. Growing demand and higher prices of domestic meat products have driven the growth in China’s meat imports over the past few years. China’s meat imports have shifted from items like chicken feet and animal offal to muscle meat, as living standards rose and China opened its market to more beef and mutton imports. The U.S. is currently the top supplier of China’s poultry and pork imports. U.S. exports of meat, dairy products, and other consumer-oriented products, such as fruits, nuts, and wine to China rose from $234 million in 2000 to $3 billion in 2013, comprising nearly 12 percent of the value of total U.S. agricultural exports to China that year. The growth in China’s meat imports could mean new opportunities for U.S. exporters. This chart is based on the ERS report, China’s Growing Demand for Agricultural Imports.