Editor's Pick 2013:
Small family farms account for most U.S. farms and a majority of farm assets 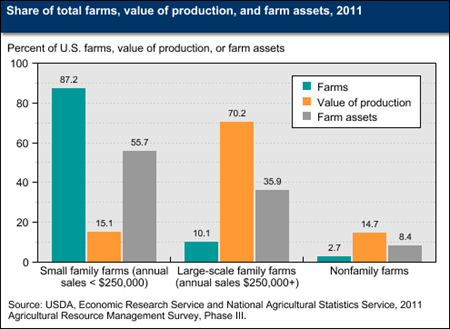 Ninety-seven percent of U.S. farms are family farms where the majority of the business is owned by the operator and individuals related to the operator. The remaining 3 percent are nonfamily farms, which produced 15 percent of the value of agricultural output in 2011. Two features of family farms stand out. First, there are many small family farms (having less than $250,000 in annual sales); together, they account for 87 percent of all U.S. farms. Second, large-scale family farms account for most of the Nation’s agricultural production—70 percent in 2011, as measured by value of output. The share of farm assets held by small farms is substantially higher than their 15-percent share of production. Small-scale family farms hold about 56 percent of all farm assets. The disproportionate asset holdings of smaller farms reflects their overinvestment, particularly in land and dwellings, for purposes other than production, and economies of size enjoyed by larger farms that allow them to produce more with the resources they control. This chart updates one found in the 2010 Edition of the ERS report, America’s Diverse Family Farms, with 2011 Agricultural Resource Management Survey data recently added to the ERS ARMS Web tool. Originally published on Wednesday, February 6, 2013.