Trans fats raise artery-clogging “bad” cholesterol (low-density lipoprotein, or LDL) levels and lower “good” cholesterol (high-density lipoprotein, or HDL) levels, which explains why many studies show an association between increased intake of trans fats and an elevated risk of cardiovascular disease (CVD). While young people are at a lower risk of developing CVD than adults, intake of trans fats in early childhood and adolescence could set in motion processes that lead to the disease in adulthood.

To reduce the risk of cardiovascular disease, USDA and the U.S. Department of Health and Human Services included a recommendation in their 2005 Dietary Guidelines for Americans to limit the intake of trans fats. Additionally, since 2006, the Federal Government has required that food manufacturers declare the trans-fat content of foods on the Nutrition Facts labels of packaged food products. In a 2012 report, USDA, Economic Research Service (ERS) researchers found evidence that food manufacturers responded to these two Federal initiatives by reformulating many of their products to eliminate or reduce trans-fat content over the 2005-10 period. According to a 2017 ERS study, U.S. adults ages 20 and older roughly halved their intake of trans fats on average between 1999 and 2010.

Did the dietary intake of trans fats also decrease for young people in the United States after these two Federal initiatives? A 2020 ERS study analyzed data publicly released in March 2019 on trans-fat consumption among U.S. youth. Data on blood plasma levels of trans fats of children (ages 6-11 years) and adolescents (ages 12-19 years) living in the United States were drawn from the 1999-2000 and 2009-2010 waves of the National Health and Nutrition Examination Survey, which is a nationally representative survey that assesses the health and nutritional status of the U.S. population. Researchers considered the sum of four different types of trans fat, as well as two types in isolation. One of those isolated types is commonly found in partially hydrogenated oils (PHOs)—the principal source of artificial or industrially produced trans fat in the food supply—and another naturally occurs in ruminant animals and is present in small quantities in dairy products.

Declining dietary intake of trans fats aligns with recommended healthy eating patterns outlined in the new 2020-2025 Dietary Guidelines for Americans, which encourages limiting the intake of trans fats to as low as possible without compromising the nutritional adequacy of the diet. 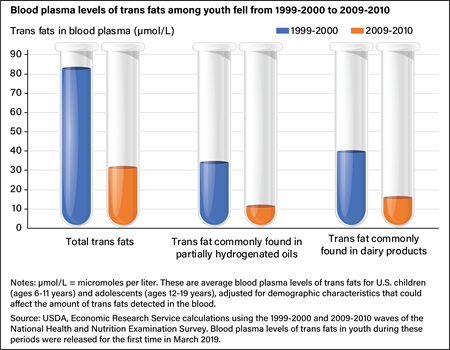