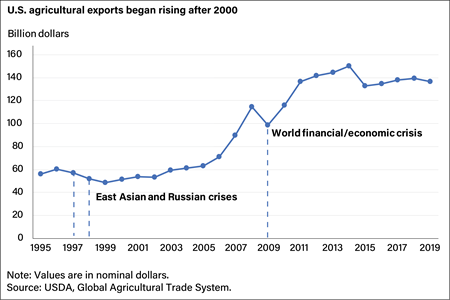 Causes and Effects of Economic Crises

Although the causes of economic crises can vary between countries, many begin within countries’ financial sectors, as was largely the case with the East Asian Crisis of 1997-98 and the world financial downturn of 2008-09. Such crises typically involve the following developments and conditions:

The International Monetary Fund (IMF) identifies 99 countries—of 195 globally—that experienced some sort of financial crisis between 1997 and 2012.

Countries undergoing a financial crisis typically report a drop in gross domestic product, or GDP, which measures their output of goods and services. This decrease can result from several factors. Countries could experience a destruction of wealth, particularly from a drop in the value of financial assets such as stock and bonds. Businesses could display a decline in confidence in the economy and hold off on investments. And, consumers might cut back on purchases as rising economic uncertainty motivates them to save rather than spend more of their income. These adverse developments, in turn, reduce the production of goods and services and income earned.

In addition, a financial crisis could lead to a weakening in a country’s currency, as measured by its exchange rate, compared with that of other countries. This currency depreciation can occur because of capital flight, as credit, investment, and wealth flee to countries with more favorable financial and macroeconomic climates.

Developing countries or emerging markets that rely heavily on the export of just a few commodities—such as energy, metals, or agricultural goods—or even a single export, such as oil in the case of Venezuela, can be vulnerable to another type of economic crisis if the world price of those products falls. The price decline reduces GDP by lowering the income earned by exports. The price drop usually also depreciates the country’s currency by decreasing world demand for it, because fewer units of the currency are needed to buy a given amount of the country’s now less expensive exports.

Both types of economic crises, originating either from financial problems or a drop in the world price of key exports, typically result in a decline in the affected country’s GDP and weakening depreciation of its currency. Both decreasing GDP and currency depreciation tend to reduce a country’s imports, including agricultural products.

The rise in the import price will motivate domestic consumers to diminish their purchases of imported goods and switch to domestically produced substitutes. Falling GDP and currency depreciation, which reduce import demand in crisis-hit countries, are the main reasons economic crises in foreign markets decrease U.S. agricultural exports.

Both the East Asian Crisis of 1997-98 and the world financial/economic crisis of 2008-09 substantially reduced U.S. agricultural exports. Six important foreign markets for U.S. agricultural exports affected by the East Asian crisis were Japan, China, Hong Kong, South Korea, Indonesia, and Malaysia. Russia also experienced a largely unrelated, though serious, economic downturn in 1998. In all seven countries, their economic downturn reduced GDP—or in the case of China, substantially lowered its rate of growth—and depreciated their currencies, especially against the U.S. dollar.

Consequently, in 1998, the value of these seven countries’ agricultural imports from the United States collectively dropped by 16 percent compared with 1997, from $23.3 billion to $19.5 billion. The fall in agricultural imports from the United States was highest in relative terms for Malaysia and Indonesia at 41 percent and 40 percent, respectively, while the decline was greatest in absolute dollar terms for Japan at $1.6 billion.

Major foreign markets for U.S. agricultural exports hit by the 2008-09 world financial/economic crisis were Canada, Mexico, China, Japan, South Korea, Russia, and the European Union (28 countries at the time, including the United Kingdom). During this event, each of these seven countries or regions experienced either falling GDP or a major drop in their economic growth rate (China and South Korea), and most also witnessed currency depreciation in relation to the U.S. dollar.

In 2009, the value of agricultural imports from the United States by these countries collectively fell by 17 percent compared with 2008, from $83 billion to $68 billion. The agricultural import decline was greatest in relative terms for South Korea and the European Union at 34 percent and 31 percent, respectively (see figure below), and highest in absolute U.S. dollar terms for Mexico and the European Union at $3.8 billion and $3.3 billion, respectively. 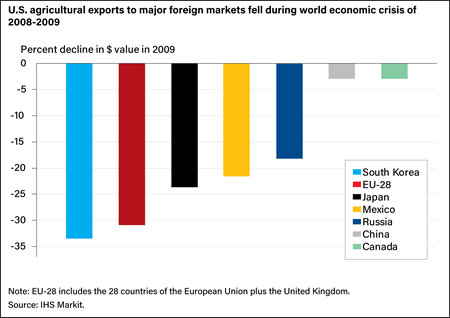 A model for world agriculture and trade created by USDA’s Economic Research Service was used to project the effect of possible future economic shocks in major foreign markets on U.S. agricultural exports. The model employed was the Economic Research Service Country-Commodity Linked (ERS- CCL) System, which covers 44 countries and regions and generates annual volumes of production, use, and trade, as well as prices for 24 agricultural commodities.

The ERS-CCL model requires certain inputs regarding the future direction of key macroeconomic variables, in particular the annual change in countries’ GDP and currency exchange rates. To simulate the effect that future economic crises in these major markets would have on U.S. agricultural exports, we used a 5-percent decline in their GDP (lasting only 1 year) and a simultaneous 10-percent depreciation of the countries’ real (inflation-adjusted) currency exchange rate against the U.S. dollar.

Support for the assumption of a 5-percent decline in GDP is that during the world financial/economic crisis of 2008-09, GDP fell in Japan, the EU-28, and Mexico by 5.4, 4.3, and 5.3 percent, respectively. The IMF estimates the current world economic crisis caused by Coronavirus COVID-19 reduced world GDP in 2020 by 3.5 percent, and GDP in advanced economies, such as Canada, Japan, and the West European countries, by 5 to 12 percent.

In the first scenario, in which each of the individual countries experiences a crisis one at a time, the fall in U.S. agricultural exports is greatest in the China-alone case, followed by the EU-28. The projected value of U.S. exports of grain and oilseeds products in the China-alone scenario drops in the crisis year by 4.2 percent (a decline of $1.46 billion) and exports of meat by 3.3 percent (a fall of $0.35 billion). Exports of soybeans and pork specifically decrease by 5.9 and 4.6 percent in value terms.

In the second scenario, in which economic crises hit many countries simultaneously, those effects are deeper.

In the scenario in which all eight countries simultaneously experience crisis, total U.S. exports of grains and oilseeds decline in value terms by 6.8 percent—a decline of $2.4 billion—and meat (beef, pork, and poultry) by 7.3 percent—a drop of $0.8 billion. The main grains are wheat, corn, and rice, while the main oilseeds in the United States are soybeans, cottonseed, and peanuts.

The export drop for both soybeans and products (meal and oil) is greater than for grains (see figure below). Exports of soybeans and soybean meal fall about 8 percent in value terms, and soy oil by around 13 percent—though the value of exports is lower—while wheat and corn exports decrease in value by about 5 percent. Exports of beef and pork also drop by around 8 percent. 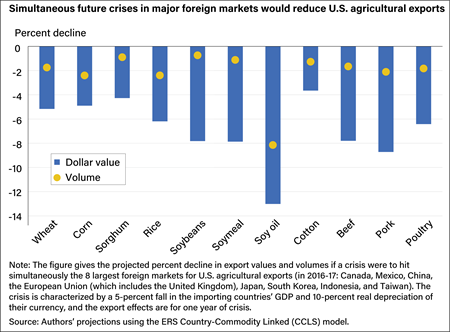 For the commodities in the figure above, the percent drop in export value exceeds the percent decline in export volume. For example, the volume of pork exported decreases around 2 percent, while the dollar value of exports declines by more than 8 percent. The reason is that the export value for a good equals the volume exported times its trade price. Crises can reduce both the volume of agricultural goods that countries want to import from the United States and the prices they pay for the imports.

In the multi-country crisis scenario, the total drop in world demand for agricultural products from so many countries being in crisis substantially drives down the products’ world trade prices, and thereby U.S. export values. A multi-country crisis scenario thereby reduces U.S. export values to a greater extent than a single-country scenario for two reasons. With more countries experiencing a downturn, the volume of U.S. exports falls by more, and the collective decline in the countries’ demand for agricultural imports decreases world trade prices by a greater percentage than if just one country endured the crisis.

To demonstrate this point, in the multi-country crisis scenario, the decline in the world price of pork projected by our model is 7.5 percent. In each of the scenarios in which the shock is applied to just one country, the world pork price falls by less than 2 percent, except in the China-alone crisis scenario when the pork price drop is 3.9 percent.

The substantially larger percentage declines in exports in value terms compared with volume in the multi-country crisis scenario also show that export prices for goods fall considerably more than export volumes. This reflects the economic reality that compared with most other products, demand and supply (production) of agricultural goods are less responsive to changes in price, the exchange rate, and income.

This relative unresponsiveness means that when a crisis simultaneously hits a large number of countries and thereby reduces world demand for agricultural products−including those imported−prices must adjust by more than the volumes of goods traded to restore market balance. More broadly, this unresponsiveness also helps explain why prices for agricultural products tend to fluctuate more than prices for most other goods. Consequently, in the multi-country crisis scenario, the value of U.S. exports drops mainly because of a decrease in the prices paid by importers, not in the volumes exported.

The root cause of the current COVID-19-generated world economic crisis lies not in the type of financial and economic developments discussed earlier in this article. As such, this crisis appears to be a special case. Also, given that the crisis is still ongoing, assessing its full impact on U.S. agricultural exports is a topic for future study. However, the analysis presented in this article can provide some insight into how the current world economic calamity caused by COVID-19 is affecting U.S. agricultural exports.

According to the IMF, the crisis generated a fall in world GDP in 2020 of 3.5 percent, and the declines in the largest U.S. agricultural foreign markets—such as Canada, Mexico, the euro area, and Japan—were much higher at 5 to 12 percent. Falling GDP, and correspondingly consumer demand, have reduced countries’ agricultural imports and thereby U.S. exports.

However, as opposed to previous crises, in 2020, the dollar did not rise in value against other major foreign currencies, such as the Chinese yuan, Japanese yen, Canadian dollar, and euro, but rather fell. The dollar depreciated largely because the U.S. Federal Reserve took action that substantially reduced the country’s interest rates to stimulate the economy. A consequence was an outflow of financial investment in search of higher returns elsewhere, which depreciated the dollar. The dollar depreciation had the effect of raising rather than reducing U.S. agricultural exports.