The Great Recession, which officially ran from December 2007 to June 2009, was the severest U.S. economic downturn since the Great Depression of the 1930s. Unemployment rose from 4.7 percent in November 2007 to a peak of 10.6 percent in January 2010. Economic recovery was slow, especially for the labor market. The 8.7 million jobs lost during the Great Recession were not recovered until May 2014. And the poverty rate continued rising in the post-recession period, hitting 13.5 percent in 2015 before falling to 12.7 percent in 2016.

Participation in two social safety-net programs—unemployment insurance and USDA’s Supplemental Nutrition Assistance Program (SNAP)—grew during the 2007-09 recession and its aftermath as American families coped with job losses and lower incomes. In 2009, 19.9 million workers received unemployment insurance benefits, and SNAP reached its peak participation in 2013 at 47.6 million people. SNAP provides eligible low-income households with monthly benefits that can be used to purchase food at participating retailers. Unemployment insurance is a Federal-State program that pays temporary weekly cash benefits to eligible workers as a partial income replacement during involuntary joblessness. 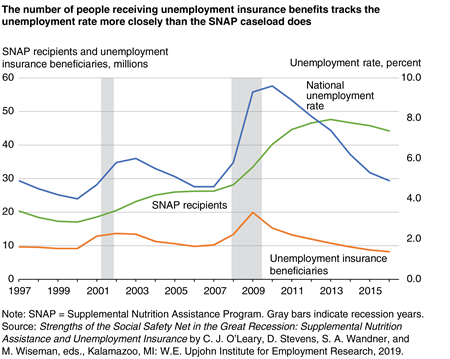 More recently, ERS funded researchers used program administrative data for six States—Florida, Georgia, Maryland, Michigan, Missouri, and Texas—to conduct studies on the interaction between SNAP and unemployment insurance. This multi-State project was conceptualized by the U.S. Department of Labor and emerged from ERS’ commitment to develop and use administrative records from Federal and State programs to conduct research that informs policy decisions related to food assistance programs. By providing a complete census of all program activity along with precise measurement of actual benefit payment amounts, administrative records allow researchers to reliably analyze program interactions. A key finding from the six State studies is that the participation overlap for the two programs varied for States with different labor market conditions. There is also some evidence that receiving unemployment insurance benefits reduced the number of households participating in SNAP.

Some Low-Income Working Households Benefit From Both Programs

SNAP benefit amounts are based on household size, and eligibility depends on a household’s net income after accounting for housing and child-care expenses. Initial eligibility is usually set for a fixed period that generally ranges from 6 to 12 months. The average monthly per person SNAP benefit was $125 in fiscal year 2018.

In good economic times, unemployment insurance beneficiaries receive only “regular” benefits, for which the maximum duration of benefit receipt is usually 26 weeks in most States. But during recessions, additional benefit programs may be available through Federal-State extended or Federal emergency benefits. During and after the Great Recession, there were periods when unemployed workers in some States could receive up to 99 total combined weeks of regular and extended benefits. The Great Recession and its aftermath also resulted in sharp increases in the exhaustion of entitlement to unemployment insurance benefits. As a result, a larger than usual share of unemployment insurance recipients became eligible for SNAP.

All six State studies examined SNAP and unemployment insurance interactions between 2006 and 2010, although data extending into 2014 were used for Texas and into 2015 for Georgia and Maryland. The core timeframe included several months before and after the official period of the Great Recession. The core timeframe also included the period when monthly SNAP benefit amounts were increased by nearly 14 percent in April 2009 through the American Recovery and Reinvestment Act to alleviate hardship due to the recession and to stimulate the economy.

The six States provide a diversity of policy contexts. While access to SNAP benefits is governed by Federal laws and regulations, States have some flexibility for setting policies regarding asset limits, how often people need to re-apply for benefits, and whether participating in other assistance programs confers eligibility for SNAP benefits. States also have some latitude for setting policies regarding outreach and some other aspects of program administration. Similarly, State laws and regulations governing unemployment insurance eligibility and benefits encompass a broad range of policy options, particularly for lower level earners who might also turn to SNAP after a job loss.

At the start of the Great Recession in late 2007, labor markets differed across the six States, with unemployment worst in Michigan (7.1 percent) and best in Maryland (3.5 percent). By the official end of the recession in June 2009, Michigan’s economy was recovering but Maryland’s was still slowly declining.

Similar to national trends, the unemployment insurance programs in the six States responded more quickly to worsening economic conditions than SNAP did, both with increased payments during the economic decline and scaled-back payments during the recovery. Changes in the numbers of people receiving unemployment insurance benefits were particularly quick in Florida, perhaps due to the rapid collapse in construction employment, while SNAP recipient numbers rose slowly in Texas. One factor accounting for the slow growth in SNAP participants in Texas may have been the State’s decision not to fully expand eligibility in all the ways permitted by Federal recession-recovery legislation.

Receipt of Unemployment Insurance Among SNAP Participants Increased Sharply in All Six States, But the Demographic Profiles of Participants Varied

The share of working-aged SNAP recipients who also received unemployment insurance (UI) benefits in the same month (joint SNAP-UI recipients) in 2006 ranged from 2.5 percent in Maryland to 8.3 percent in Michigan, reflecting the difference in economic conditions in each State prior to the Great Recession. By 2009, the shares of joint SNAP-UI recipients had increased in all six States and ranged from 9.1 percent in Texas to over 13 percent in Florida. While the levels differed, the time trends in joint usage were similar in all six States. Florida had the biggest and sharpest rise in the share of joint SNAP-UI recipients, with the rate rising from 3.5 percent in 2006 to 13.5 percent in 2009. Michigan had the smallest increase in joint benefit receipt during the Great Recession because it started at a high level, having not fully recovered from the 2001 recession. 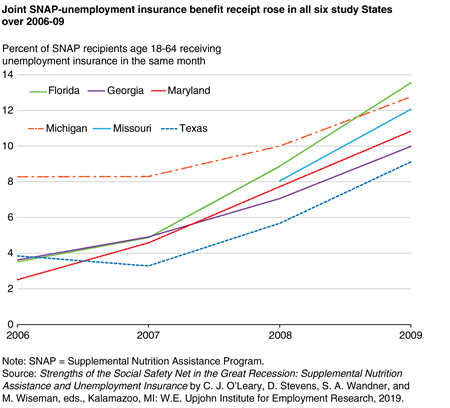 The observable characteristics of joint SNAP-UI recipients differed across the six States studied, reflecting in part differences in which types of households and workers were impacted by the Great Recession in each State. The Maryland analysis showed joint SNAP-UI recipients were most likely to be young, female, minority, single with children, and with high school or less schooling. On the other hand, Florida showed the increase in joint SNAP-UI recipients came mostly from male-headed white households, leading to declines in the share of joint program beneficiaries with children, those with disabilities, and those who were African American. Research in Georgia provided evidence that, for older recipients, SNAP became particularly important in the midst of the recession and during both the early and late stages of the economic recovery.

The Texas and Florida studies examined in more detail able-bodied adults without dependents (ABAWDs) receiving SNAP. In Florida, these households increased from 20 to 42 percent of the SNAP population, while in Texas the ABAWD group of SNAP recipients did not rise above 5 percent of all SNAP cases—perhaps due to unchanging ABAWD eligibility requirements in Texas. The Texas study also provided evidence that early and adequate income assistance from SNAP and unemployment insurance helps recipients return more quickly to prior earnings levels after job loss.

Additionally, there was some evidence from Michigan that among prior SNAP recipients who lost their jobs after leaving SNAP, receiving unemployment insurance benefits is associated with a lower chance of returning to SNAP. This suggests that Federal extensions of unemployment insurance probably kept the number of people receiving SNAP benefits lower than it would have been in the absence of emergency and extended unemployment benefits.

Policy Changes in One Program Spillover to Other Programs

A major public policy question is whether these threads of the social safety net will be strong enough to work together as well as they did in the Great Recession and help workers and households survive and recover should a future recession occur. The higher benefit levels for SNAP participants as part of the 2009 American Recovery and Reinvestment Act expired in November 2013. Furthermore, some States have reduced the maximum number of weeks unemployed workers can receive unemployment insurance benefits—actions that are estimated to impact the number of people applying for SNAP benefits. Program eligibility and designs of both the SNAP and unemployment insurance programs and how they interact can affect how responsive these programs are to economic conditions and their ability to alleviate hardship experienced during and after recessions.

Participation in SNAP and Unemployment Insurance: How Tight Are the Strands of the Recessionary Safety Net?, by David Finifter and Mark Prell, USDA, Economic Research Service, November 2013

The Supplemental Nutrition Assistance Program (SNAP) and the Economy: New Estimates of the SNAP Multiplier, by Patrick Canning and Brian Stacy, ERS, July 2019