by Sandra Hoffmann and Arie Havelaar

In 2015, with ERS assistance, the World Health Organization (WHO) published the first estimates of the global and regional incidence and burden of foodborne disease. Measuring the global and regional incidence of foodborne diseases and their health effects—or burden—is an important first step in managing the safety of food around the world. Foodborne disease outcomes vary by pathogen and differ in severity from a few days of diarrhea to chronic kidney disease and even death.

To account for this variability, disease burden is measured in Disability Adjusted Life Years (DALYs), the number of years of life lost or spent at a lower level of health than would have occurred without the foodborne disease, weighted by the severity of the disease. One DALY is equivalent to 1 year of healthy life lost. WHO estimates that in 2010, with a world population of 6.9 billion, global foodborne diseases resulted in 600 million illnesses, 420,000 deaths, and 33 million DALYs. Disease burden estimates can help inform efforts to prioritize actions to improve food safety, particularly in low-income regions.

Public health officials view increased consumption of animal-source foods as an important means of reducing early childhood malnutrition, particularly in low-income countries. An ERS researcher collaborated with scientists from the University of Florida and other institutions in estimating the burden of 13 foodborne diseases caused by 8 animal-source foods in 14 WHO global-burden-of-disease subregions. WHO subdivides its 6 major regions into 14 subregions based on overall child- and adult-mortality rates. Mortality rates generally reflect a region’s level of development or income. Globally, animal-source foods—meats, fish, dairy products, and eggs—account for approximately one-third of the total burden of foodborne disease.

In sub-Saharan Africa and South East Asia, pork and poultry were the most important sources of foodborne disease burden, as were fish and shellfish in the Western Pacific B subregion. This reflects both the prevalence of these foods in local diets and the severity of the diseases caused by pathogens in these regions. 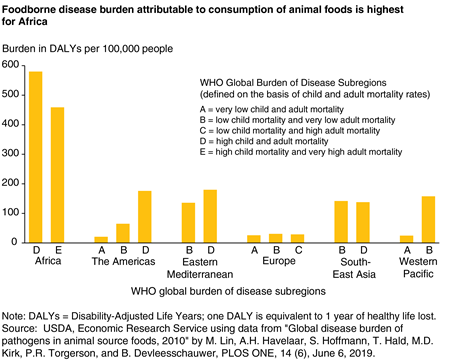