The Federal Government implements a number of programs that help mitigate risk in agriculture, with expenditures on these programs of approximately $120 billion over the past decade. The largest program is the Federal Crop Insurance Program (FCIP), which insures participating farmers against adverse production or market conditions. Under the FCIP, the Federal Government pays a portion of farmers’ premiums; these premium subsidies represent FCIP’s costs to the Government.

The cost of administering the FCIP rises in years with adverse weather events, such as droughts, when insurance claims outpace premiums paid for insurance coverage. Premiums are adjusted over time based on recent claim payout histories. As the frequency of adverse weather events changes, so do premiums. Climate change could affect the Federal Government’s fiscal exposure from the FCIP as premiums and subsidies adjust with changing growing conditions. Adverse weather could make yields more variable from year to year, causing losses to happen more frequently. Commodity prices could become more variable if adverse weather events affect large proportions of farmland at the same time, also increasing the frequency of crop insurance losses. Finally, declining supply could raise average commodity prices, causing increased payouts when losses occur, and therefore also raising premiums and subsidies.

Recent ERS research used statistical, geophysical, and economic models to explore how climate change could affect the cost of the FCIP. Researchers trained statistical models to predict crop yields from historical weather data, and used weather simulations from climate models to build scenarios projecting how yields, and yield variability, might respond to climate change in the year 2080. An economic model then translated those changes in yield into changes in crop production and crop prices under two scenarios: one in which farmers have the flexibility to adapt to changes in yield by adjusting their planting behavior (i.e., changing crops, crop acreage, and management) and one in which they do not have it. The study compared climate scenarios arising from different projections of greenhouse gas emissions levels to a hypothetical future with climate similar to that of the past several decades.

Under the scenario with moderate emissions reductions and farmer adaptation—in which farmers adapt to changes in climate with adjustments to what they plant, where they plant it, and how they manage it—the cost of today’s FCIP would be on average about 3.5 percent higher than under a future with a climate similar to that of the recent past. Under the scenario in which emissions trends continue and farmers adapt, the cost of the FCIP would increase by an average of 22 percent. The estimated increases in the cost of FCIP are an average across the climate models shown in the chart—some models are more optimistic, while others more pessimistic. Cost estimates are higher in scenarios with no adaptation because farmers’ flexibility to change planting decisions in response to climate change moderates the projected rise in Federal FCIP costs.

The estimated increase in FCIP costs is driven primarily by increasing commodity prices, followed by increasing yield risk. Results show that price risk is likely to decline for some crops under climate change, as the models suggest that average prices would increase faster than price volatility. 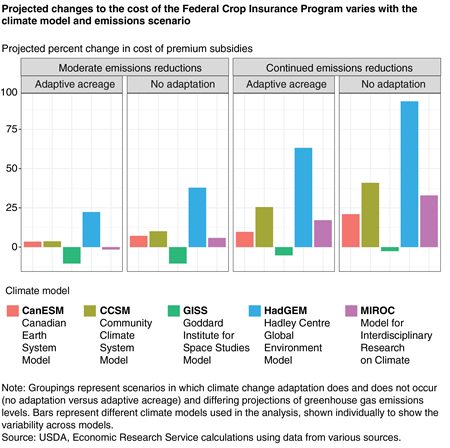