In 2017, roughly 2 million people spent all or part of their year as agricultural wage and salary workers. However, because many of these jobs are seasonal, the average annual wage and salary employment in U.S. agriculture that year is estimated at about half that number, or about 1 million full-time, full-year equivalents. These workers plant and harvest crops, tend nurseries and greenhouses, raise hogs and chickens, milk cows, and perform many other tasks.

The composition of this workforce is steadily evolving. Over the past decade, the average age of hired farm laborers (excluding managers, supervisors, and other supporting occupations) has risen steadily, from age 35.8 years in 2006 to 38.8 years in 2017, an increase of 8 percent. This increase has been entirely driven by the aging of foreign-born farm laborers, who comprised between 54 and 58 percent of the workforce over this period. Their average age rose from 35.7 in 2006 to 41.6 in 2017, an increase of 16 percent. In contrast, the average age of farm laborers born in the United States (including Puerto Rico) has remained roughly constant.

The main reason for the aging of the foreign-born farm laborer population has been the decline (starting in 2008) in the flow of new immigrants—who tend to be younger. This diminishing flow is reflected in an increase in the average number of years since these workers’ original immigration, from 12.4 years in 2007 to 18.6 years in 2017. It is also reflected in a decline in the estimated numbers of unauthorized immigrants from Mexico who are in the country (counting all such people, not just farmworkers), which fell by about 22 percent between 2007 and 2016, according to the latest estimates from the Pew Research Center.

An aging workforce is of obvious concern to farm employers, because older workers are less productive at the most physically demanding jobs and many are nearing retirement age, with fewer replacements on the horizon. One response has been to increase the use of mechanical aids, such as hydraulic platforms that replace ladders in orchards, or mobile conveyor belts that reduce the distance that heavy loads must be carried in the fields. These changes may enable workers to prolong their careers, and may also make it easier for more women to work in agriculture. Between 2006 and 2017, the share of farm laborers who were women rose from 19.5 percent to 25.0 percent. 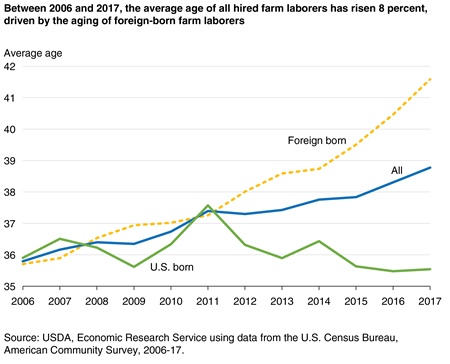