U.S. Caloric Sweetener Deliveries Continue to Decline on a Per Capita Basis, Driven By Lower High-Fructose Corn Syrup Use

Caloric sweetener use in the United States has been declining steadily on a per capita basis since reaching a peak in 1999. Caloric sweeteners include refined sugar from sugarbeets and sugarcane, corn sweeteners, honey, and edible syrups. However, despite the overall decline in total domestic deliveries—which represent shipments to downstream food and beverage manufactures and retail distributors—refined sugar deliveries per person have been trending upward since 2008 and the implementation of the North American Free Trade Agreement sweetener provisions with Mexico. This increase was primarily at the expense of high-fructose corn syrup (HFCS), the predominant corn sweetener.

Over the past decade, growth in U.S. sugar domestic use has been driven by an increasing population and substitution away from HFCS. Per capita refined sugar deliveries fell in 2018 for the second consecutive year. This reduction was still not as large as the decreases seen in HFCS or total caloric sweeteners, but may signify a change in the factors driving sugar demand in the United States. Flat or decreasing per capita deliveries would constrain usage growth in the United States. Several factors could explain these recent trends: increased awareness of sugar and caloric intake by U.S. consumers; changes in U.S. food and beverage manufacturers’ formulas to reduce total sugar in products, rather than simply substituting types of sweeteners; as well as changes in trade patterns of sugar-containing products (SCP) due to relative costs of U.S. versus foreign-produced food products, as more imports and fewer exports depress demand for U.S. refined sugar.

Per capita deliveries of HFCS have also seen a steeper pace of annual declines in recent years. Much of the decline in sweetener deliveries in the United States since 1999 can be attributed to HFCS use. This can be attributed to two main factors. First, corn prices have been relatively high, especially since the mid-2000s and the increased use of corn for ethanol production. Second, as mentioned previously, HFCS has seen a reduced demand from food and beverage manufacturers and consumers—both in the types of products that use HFCS and the formulation of those products, as evident by the increased prevalence of front-of-package labeling that focuses on HFCS contents. 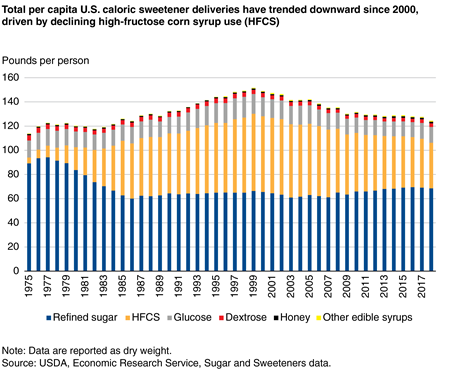