USDA’s Special Supplemental Nutrition Program for Women, Infants, and Children (WIC) provides low-income pregnant, post-partum, and breastfeeding women, infants, and children up to age 5 with specific quantities of nutritionally targeted foods at no personal cost. Due to differences in food prices and other factors varying across the State agencies that administer WIC, the average cost of providing these supplemental foods varies substantially: the average monthly food cost per person during fiscal 2017 ranged from $27.08 in Texas to $50.94 in New York. Examining ways to contain food costs, including the prices charged by the stores authorized to redeem WIC benefits, provides information to help ensure the efficient use of Federal funds.

Many States authorize a mix of store types to redeem WIC benefits to promote adequate participant access to the benefits. The tradeoff is that smaller and nontraditional food stores may charge relatively higher prices for WIC-approved foods for economic reasons, potentially increasing program costs. Recent work published by ERS examined the extent to which prices for seven WIC-approved foods—breakfast cereal, reduced-fat and whole milk, peanut butter, 4-ounce jars of infant fruits/vegetables, juice, and whole grain bread—varied by store type. The study relied on administrative data from four WIC State agencies on transactions that occurred during several months of 2014. Two of the States—one in the Southwest and one in the Midwest—had sufficient numbers of small WIC-authorized food retailers to allow cost comparisons across store types.

The researchers found that, surprisingly, there was only a modest difference in the cost of a set of foods between supercenters and other store types in many cases. The cost of the fully breastfeeding woman’s and child’s monthly food baskets at supermarkets/grocery stores and most small and nontraditional food retailers was within plus or minus $6 of the cost at supercenters in both States, where the average cost of these food baskets ranged from $33.40 to $48.58. This was due in part to relatively high prices charged by some supercenters for milk counterbalancing other lower priced items.

The Southwest State had the same range of costs (within $6) for the monthly infant food basket, with a statewide average cost of $39.68, although the costs at small and nontraditional stores, local chains, and independent stores were notably higher than those at supercenters. In the Midwest State, however, the cost of the monthly basket of infant foods was about $20-$25 higher at small and nontraditional food retailers than at supercenters—47 to 59 percent higher than the statewide average $42.24 cost of the basket. The higher cost in this State was driven by prices charged for jars of infant fruits and vegetables. These findings indicate that targeted cost-containment efforts focusing on specific food categories rather than store types may produce the largest savings. 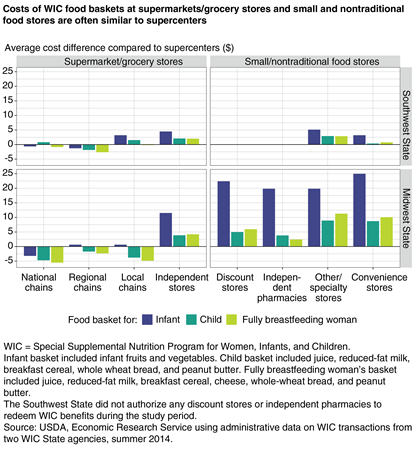