by Howard Elitzak and Abigail Okrent

The ERS Food Expenditure Series provides the most comprehensive measure of the total value of all food acquisitions in the United States. The series tracks food expenditures at grocery stores, supercenters, warehouse clubs, and other retail stores (for food at home, or FAH) and at restaurants, school cafeterias, hotels and motels, recreational places, and other away-from-home eating places (for food away from home, or FAFH). The series also estimates the value of home production—food grown or caught for personal consumption.

Unlike some other series that encompass only spending by households, such as the Bureau of Labor Statistics’ Consumer Expenditure Surveys (CES) and the Bureau of Economic Analysis’ Personal Consumption Expenditures (PCE), ERS’s series includes data on meals and snacks provided by or paid for by businesses. The ERS series accounts for the value of foods obtained as part of an away-from-home activity or location, such as meals served to airplane passengers, hospital patients, nursing home residents, and prison inmates. The value of these meals is included in the FAFH category. CES and PCE do not explicitly show the value of food from such activities or institutions in their estimates.

The ERS series also tracks food spending by Federal, State, and local governments, including food purchased as part of food and nutrition assistance programs or as part of doing business (e.g., expensed meals), and meals served at government-sponsored group quarters (e.g., correctional facilities, nursing homes, group homes, military quarters) and hospitals. In 2017, 84 percent of total U.S. food expenditures were made by households, 9 percent by businesses, and 7 percent by Federal, State, and local governments.

ERS researchers recently incorporated new source data and improved methods in the Food Expenditure Series to provide more robust and timely annual estimates. In addition, the expenditure tables published on the ERS website have been simplified to make it easier to interpret the estimates.

The improved data and methods resulted in revisions to both the FAH and FAFH pre-2015 estimates. For FAH, estimates of purchases from direct sellers (farmers, manufacturers, and wholesalers) were revised downward by an annual average of $36.4 billion in 1997-2014. The value of home food production and Federal Government donations of food commodities was revised downward by an annual average of $17.0 billion in 1997-2014. For FAFH, the improvements resulted in annual average upward revisions of $12.6 billion in food revenues for schools and colleges in 1997-2014 and $6.7 billion in sales for food furnished in group quarters—such as prisons and military barracks, employee sites, and hospitals—and food sold in miscellaneous FAFH outlets not classified elsewhere. 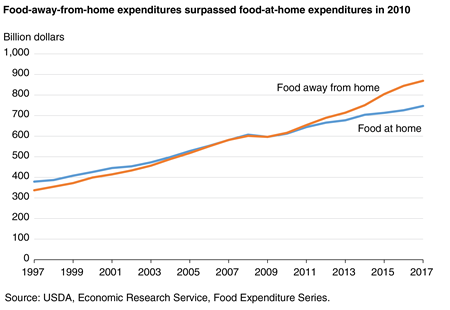 ERS’s Food Expenditure Series reveals notable trends in the U.S. food retailing and foodservice markets. Over the last two decades, warehouse club stores and supercenters have gained FAH sales relative to grocery stores. In 1997, grocery stores comprised 71.4 percent of FAH expenditures, while warehouse clubs and supercenters accounted for just 6.6 percent. By 2017, the share for grocery stores had fallen to 58.4 percent while the share for warehouse club stores and supercenters had risen to 21.8 percent. Mail order and home delivery comprised 3.0 percent of FAH expenditures in 2017, while convenience stores totaled 2.0 percent and mass merchandisers 1.2 percent. The remaining 13.6 percent of FAH expenditures included purchases from a variety of other food and nonfood stores, purchases from direct sellers, and home production and Federal commodity donations. For FAFH, ERS’s Food Expenditure Series points to Americans’ growing appetite for the offerings from limited-service restaurants, where food is ordered and paid for at a counter or drive-thru window. Full-service restaurants with wait staff held steady at 35.8 percent of the FAFH market over the last 20 years, while limited-service restaurants rose from 33.3 to 36.1 percent over the same period. The share of FAFH expenditures occurring at hotels and motels and at schools and colleges declined between 1997 and 2017, while the share at recreational places and at retail stores and vending increased. In addition to annual expenditures, ERS’s Food Expenditure Series provides monthly estimates of FAH and FAFH sales (excluding home production, food donations, food assistance spending, food revenues at schools and colleges, and food furnished to employees or as part of another activity). Monthly FAH and FAFH expenditures exhibit seasonal patterns. For example, monthly FAH sales rise in November, accompanied by a decline in FAFH sales. Both FAH and FAFH sales tend to rise during the December holiday season before dropping during the first 2 months of the following year. In 2017, FAFH sales were higher than FAH sales for most of the year, but the order reversed in November and December. 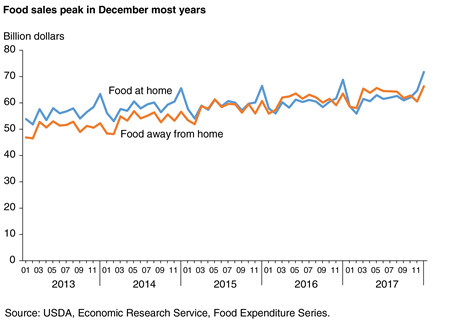