In 2016, China had the world’s third largest dairy market, and it is expected to grow by 10 percent, in total, over the next 5 years. An expanding network of refrigerated facilities for production, distribution, and storage and an advancing e-commerce platform are making dairy products accessible to a greater portion of the Chinese population.

To satisfy demand, China’s domestic dairy industry has been rapidly modernizing in an effort to increase production and improve distribution efficiency. Now and over the next 5 years, three-quarters of all dairy consumed in China will continue to be produced domestically. However, milk production remains relatively inefficient. On average, cows in China were half as productive as cows in the United States, producing 5 metric tons of milk per cow as compared with 10.3 metric tons. To enhance production, China’s Government has promoted the creation of large dairy corporations and tightened regulation of the dairy industry. Expanded dairy operations allow Chinese producers to incorporate higher quality feed while reducing the cost per unit of production as fixed costs are spread across greater output. Additionally, the consolidation of companies has reduced costs for the Government by making it easier to monitor food safety.

As consumption outpaces its domestic supply, dairy exporters are finding new opportunities in China’s market. New Zealand and Australia have free-trade agreements (FTA) that lower tariffs on their dairy products entering China. Additionally, the European Union’s elimination of dairy production quotas in 2015 increased global dairy supplies, of which some may be exported to China. Between 2014 and 2016, U.S. dairy exports declined from $75 to $41 million. The reason for the decline is unclear, but it may be attributed to the combination of a stagnant Chinese economy, China’s FTAs with New Zealand and Australia, growth in China’s domestic dairy production, and a strong U.S. dollar relative to competing suppliers.

Despite the recent declines in dairy exports, the United States has a well-established trade relationship with China. The modernization of China’s dairy industry and enlargement of its herd size provide new opportunities for U.S. exports of feedstuffs and other intermediate inputs. For example, between 2010 and 2016, tonnage of U.S. alfalfa exports grew sixfold with a trade value expansion from under $2 million to more than $22 million. Additionally, the quantity of U.S. exported veterinary vaccines doubled and bull semen increased sixfold. China’s prioritization of its domestic dairy production is reflected in trade policies. Low-value-added commodities, which include inputs to the dairy industry, are subject to lower duties than high-value-added products, such as skim milk powder, yogurt, and cheese. 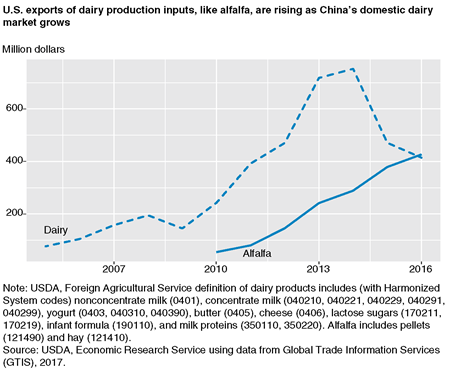