by Catherine Greene and Dennis Vilorio

Converting from conventional to organic production systems requires the use of approved materials and practices in every phase of crop production. For example, most of the synthetic pesticides and fertilizers used for pest and nutrient management in conventional crop production are prohibited in organic production. In addition, farmers cannot be certified organic and receive organic price premiums for their crops and livestock until 3 years after they have adopted organic practices. These organic requirements may decrease crop yields, increase labor requirements, and slow the adoption of certified organic farming systems in some commodity sectors.

Corn and soybeans are the two most widely grown crops in the United States and are commonly used as animal feed in the livestock sector. In 2016, U.S. farmers planted 94.1 million acres of corn and 83.7 million acres of soybeans, over 90 percent with genetically engineered (GE) seed varieties. Out of the total U.S. corn and soybean acres planted that year, only about 0.3 percent (533,000 acres, about two-thirds the size of Rhode Island) were certified organic. Adoption of organic systems has been significantly higher in the specialty crop, dairy, and poultry sectors, where the farm share of the U.S. food dollar is higher than in corn, soybean, and other commodity crop sectors: 6 percent of vegetable acres, 3 percent of dairy cows, and 5 percent of layer hens were organically produced in 2016. 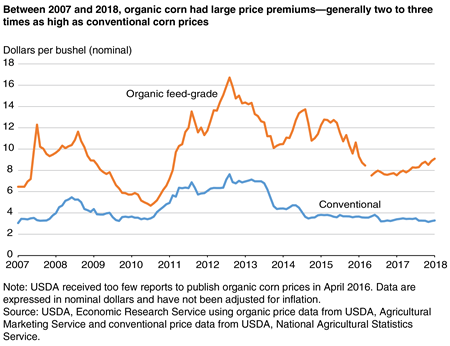