Global food security—when people have access to at least 2,100 calories per day—has improved over the past 15 years, but countries still face challenges and there is still a need for improvement. ERS researchers recently analyzed the factors that led to past progress and highlighted emerging challenges and issues to feed 9 billion people in the world by 2050. Two key drivers of past improvements in food security are increased agricultural production and trade. For most of the countries studied, domestic production supplies most of the staple foods that people eat. Increases in production and agricultural productivity—producing the same or more output with fewer inputs like fertilizer or land—have improved food security. On average, the faster the growth in agricultural productivity, the greater the reduction in food insecurity.

In countries where climate or lack of land or water resources limits the potential for local production, food imports have played an important complementary role. Across all regions, food aid has decreased as a share of total cereal grain imports, with commercial food imports becoming more important to developing countries. In turn, these countries are becoming more significant in the global trading system as their imports rise. Growing income and increased urbanization also create new opportunities for future trade. While some developing countries try to achieve food self-sufficiency as a food security strategy, others found that competing in world markets for goods and services and opening food markets to international trade have improved food security.

Despite past success, challenges remain. Maintaining agricultural productivity growth as the global population rises will require investments to generate and deliver new technologies as well as efforts to broadly spread their adoption in food-insecure countries. Where productivity is growing, there are still vulnerable groups that are subject to food insecurity, including women and children, very poor households, and those in geographically disadvantaged regions. Safety nets are in place in some developing countries to provide food or income to these groups. Other challenges include expanding safety net availability and developing programs to help vulnerable agricultural producers to manage risks such as adverse weather and price instability. Finally, even with adequate total calories, some people have nutritionally inadequate diets. Growing evidence links these types of diets with a variety of acute and chronic health conditions, leading to more emphasis on nutrition as a part of food security analysis. Developing new approaches to strengthen the nutritional dimension of food security remains a significant challenge for the next decades. 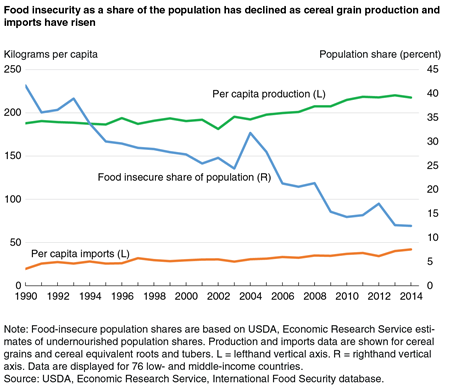