The commodity type produced by a farm can also have implications for the structure and income received by farm households. Clear differences in labor allocation emerge as a result. Many farm operations require primarily part-time or seasonal work, which can allow members of the operator’s household to work off-farm with little interruption to the farming operation. Across all farms by commodity type, in 2016, average on-farm hours worked by the principal operator ranged from 16 hours per week for general crop farms to 64 hours per week for dairy farms. Principal operators of cotton, peanut, and rice farms worked an average of over 40 hours a week on-farm—while operators of general livestock, beef cattle, and fruit and nut farms worked less than 30 hours per week on-farm.

In addition to farm size and commodity type, off-farm work by principal operators varied by operator age. Younger farmers (under age 35) worked 31 hours a week on-farm on average while devoting another 31 hours per week to other work pursuits. By comparison, older farmers (age 65 or older) spent an average of 25 hours per week working on their farm and just 9 hours working off-farm.

Spending time working on-farm limits the time available not only for off-farm employment but also for housework, families, or leisure activities (including sleep). Accordingly, the amounts of time spent working on- and off-farm are negatively correlated across all commodity types (although there is substantial variation across different commodities). For example, dairy farmers tend to have the most rigid farm schedules, and so they work only 6 hours per week off-farm on average. By comparison, beef cattle farmers tend to have highly flexible schedules and so spend an average of 20 hours per week in off-farm employment. 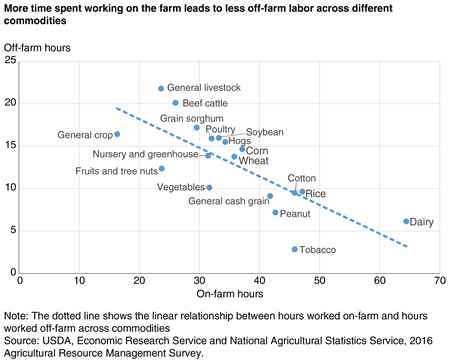