by Annemarie Kuhns and David Levin

Last year marked the first time in nearly 50 years that grocery store (food-at-home) prices were lower than those in the year before. In 2016, retail food prices decreased by 1.3 percent, as many food categories saw declining year-over-year prices, including beef and veal, pork, poultry, eggs, and dairy.

Looking at the last 50 years of Consumer Price Index (CPI) data for food at home reveals that retail food prices have, on average, risen 4 percent annually. However, the degree of the price change varied over time. High inflation in the 1970s—price increases as large as 16.4 and 14.9 percent in 1973 and 1974—were precipitated by food commodity and energy price shocks. On the opposite end of the spectrum, prices increased at levels well below the historical average in 2009 (0.5 percent) and 2010 (0.3 percent), as the 2007-09 recession put downward pressure on prices for many goods, including food. The last year that retail food prices did not increase over those of the previous year was 1967, when food-at-home prices fell 0.3 percent below 1966 levels.

The unusual decline in retail food prices in 2016 can be attributed to a culmination of factors. Retail food prices, in general, are driven by the costs of several production factors, including commodity inputs, transportation, and food processing. Declining prices for retail meats, eggs, and dairy in 2016 are largely a story about rising commodity production, especially for eggs. Retail egg prices declined by 21.1 percent in 2016, as the industry recovered from the outbreak of Highly Pathogenic Avian Influenza (HPAI) that killed 11 percent of egg-laying birds in 2015. As the number of egg-laying birds and production returned to pre-HPAI levels, prices began to drop both at the farm and retail levels. The cattle, hog, poultry, and dairy industries also saw upticks in the number of animals produced in 2016.

Retail prices did not fall for all food categories in 2016. Fresh vegetable prices remained flat, and consumers paid more for fresh fruits (2.2 percent) and for products in the “other foods” CPI category (0.3 percent). 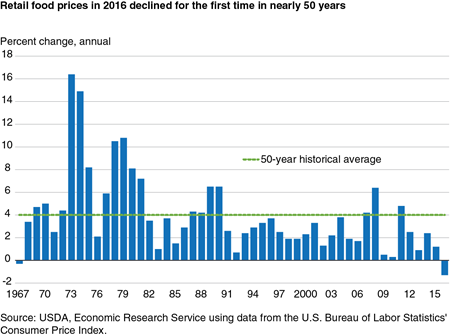