Pulses Production Expanding as Consumers Cultivate a Taste for U.S. Lentils and Chickpeas

Pulses are a versatile group of 12 leguminous crops, including dry beans, dry peas, lentils, and chickpeas (also known as garbanzo beans), which produce an edible seed that grows within a pod. U.S. pulses production has trended higher for several years and for the 2016/17 marketing year, lentil and chickpea production is set to reach consecutive record highs. Strong exports and rising domestic demand are driving the surge in pulse crop production. In particular, Americans are consuming more pulse-focused food products like hummus, which has seen retail sales rise from less than $10 million in the late 1990s to industry estimates in the range of $700-800 million in more recent years, according to the U.S. Dry Pea and Lentil Council.

Consumption of chickpea-based hummus and other pulse products, such as lentils, is supported by trends toward more healthful and varied snacking, as well as growing demand for gluten-free products. Pulse crops are naturally gluten-free and are also high in fiber and a good source of protein. In recognition of these nutritional properties, the 2010 U.S. Dietary Guidelines for Americans recommends more frequent consumption of lentils, dry peas, and beans and notes that servings of pulses can be classified as belonging to either the vegetable or protein food group.

Encouraged by growing demand for pulses that has supported rising prices at the farm level, American farmers have increased plantings of lentils, dry peas, and chickpeas while area for dry beans (less garbanzo beans) has remained relatively stable. Areas of expanded plantings and harvested area are largely concentrated in the Northern Plains (Montana, North Dakota, and South Dakota) and the Palouse area of the Pacific Northwest (includes parts of Washington, Idaho, and Oregon). Cool-season legumes grow well in these regions, which are typically characterized by dry land farming practices and are important production areas for small grains, including wheat and barley. Since 2011, as consumer demand for lentils and chickpeas surged, combined harvested area for these crops rose in Idaho (up 73 percent), Montana (up 128 percent), North Dakota (up 274 percent), and Washington (up 71 percent), while wheat planted area either remained fairly level (Montana and North Dakota) or declined (Idaho and Washington).

U.S. pulse production gains have benefited not only from increased domestic consumption but also from generally rising growth in volume exports. For the 2011/12 marketing year, combined pulses exports were estimated at about 1.78 billion pounds; for 2016/17, exports are projected to reach 2.79 billion pounds and to account for about 43 percent of total production.  Despite the volume increase, over the past several years, the proportion of the U.S. pulse crop entering export channels has generally trended down. This effect is a reflection of growing domestic consumption but masks the important effects of world markets on U.S. markets. For example, following a shortfall in Indian lentil production, dubbed the “dal crisis,” U.S. farmers expanded 2015/16 lentil production by 53 percent over the previous year. In combination with low wheat prices and maintained export and domestic prospects, U.S. farmers are projected to increase lentil production for 2016/17 by a full 120 percent over the 2015/16 estimate. 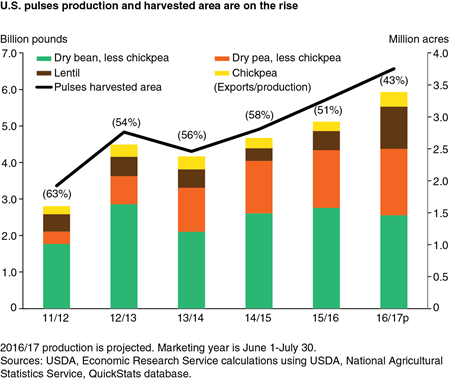