Despite the importance of income volatility for farm household behavior and welfare and the growing emphasis of Federal programs on farm income risk reduction, there is little information about the extent of individual U.S. farm household income volatility and the degree to which it varies across different types of households.  Aggregate statistics (e.g., the national mean or median income) can provide useful insight into how the farm sector as a whole fares from year to year but can mask considerable variation at the farm level. In a given year, producers in one region might be thriving, whereas those in another region might be incurring losses from local drought or pest infestations—so individual household income can vary much more than aggregate statistics would suggest

For example, between 1999 and 2004, the median farm income for a commercial farm household (with at least $350,000 in gross cash farm income, adjusted for inflation) ranged from about $70,000 to $180,000, and the average magnitude of the change (positive or negative) in median income between consecutive years was about $20,000. The median income over the period varied less than the income of a typical commercial farm. This is illustrated in the figure with the red line, which shows the annual farm income of a single hypothetical commercial farm. Between 1999 and 2014, this typical farm had the same average income as the median commercial farm (about $120,000). However, the income stream for the farm shown here varied more from year to year—with an average income swing of $86,000. Because farm income spans a wide range, in some years, a usually profitable commercial farm household loses money. 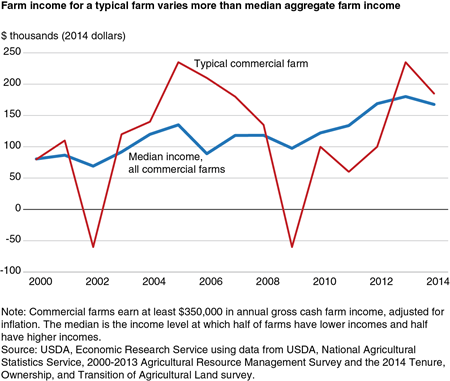 To better understand the extent of farm income variability experienced by U.S. farm operations, ERS researchers matched observations of farms that were collected more than once between 1996 and 2013 by USDA’s Agricultural Resource Management Survey (ARMS).  The survey data show how farm and nonfarm income changed over time for the same household, which allows for an accurate assessment of inter-annual income fluctuations.  Because the subset of farms that were surveyed more than once tend to be large operations, the dataset of repeat observations does not represent the farm population as a whole. However, the farms observed display characteristics that are very similar, on average, to commercial farms – the types of farms responsible for most U.S. agricultural production.

Do the main type of commodity produced, the size of the operation, or the operator’s education have an influence on farm household income volatility? Model results indicate that crop farms have a total household income that is about 9 percent more volatile than that of livestock farms. Total income (farm and off-farm) might be less volatile on livestock farms than on crop farms because the prevalence of marketing and production contracts on hog and poultry operations reduces farm income volatility. It is also possible that crop production is inherently more volatile than livestock production as crops are more vulnerable to weather and pests.

Operators who reported farming as their primary occupation had income volatility that was 63 percent higher than operators who did not farm full time. Full-time operators are likely to derive more of their total earnings from farm income, which is more variable than off-farm income. Being married for both survey years is associated with a 23-percent decrease in total household-income volatility. Compared with single farm operators, married couples operating a farm likely earn a larger share of household income from less volatile off-farm sources, which reduces total income variability.

Income volatility has declined over time

The model results also indicate that the volatility of total farm household income declined 1.2 percent per year over the study period.  Several factors may account for the decline. It may be that recently adopted farming technologies and practices (e.g., genetically engineered crops, no-till farming, global positioning system technologies, precision agriculture) have reduced variations in crop yields. Farm income volatility may also have moderated because of changes in risk management by farmers, including a greater reliance on contracting (the value of production under contract increased roughly 10 percentage points between 1991 and 2007).  The expansion in risk mitigation programs, and Federal crop insurance in particular, may have contributed to the decline in income volatility. Acres enrolled beyond the most basic catastrophic coverage level increased from 117 million acres in 1996 to 280 million acres in 2013, and Federal subsidies to purchase insurance increased from $720 million to $6.6 billion in constant 2009 dollars over the same period.