Limited access to healthy and affordable food may impede some Americans from achieving a healthy diet. ERS’s Food Access Research Atlas (FARA) provides a measure of neighborhood access to healthy, affordable food for the entire Nation and allows users to map low-income and low-supermarket access census tracts for 2015 and compare the results with those for 2010.  A census tract is a small statistical subdivision of a county that usually contains between 1,200 and 8,000 people but generally averages around 4,000 people.

The FARA mapping tool uses supermarkets, supercenters, and large grocery stores as proxies for stores that sell a wide variety of foods needed for a healthy diet at affordable prices. Two nationwide directories of these types of stores were combined to update the atlas for 2015. Drug stores, dollar stores, convenience stores, military commissaries, and club stores are excluded because these types of stores do not consistently offer a wide variety of healthy foods or they have restrictions on who can shop in the store or charge a membership fee.

Low-income status is determined based on a census tract’s poverty rate or median family income using data from the U.S. Census Bureau’s 2010-2014 American Community Survey. Low-supermarket access is characterized by the number and share of people at different distances from the nearest supermarket, supercenter, or large grocery store and the number of housing units in the area without access to a vehicle that are more than 0.5 miles from one of these stores. FARA users can map four measures of low-supermarket access based on different combinations of the distance-from-supermarket cut points (more than 0.5 or 1 mile in urban areas or more than 10 or 20 miles in rural areas). This article focuses on one of those measures: Low-Income and Low-Access (LILA) Vehicle Access and 20 Miles. This measure considers a tract to be LILA if it is low-income and contains either a substantial number of households that are more than 0.5 miles from a supermarket and without a vehicle, or if it has a significant number or share of people more than 20 miles from a supermarket, regardless of vehicle availability.

Vehicle availability is an important measure of how readily a household can access a supermarket. From 2010 to 2015, the number of census tracts in the LILA Vehicle Access and 20 Miles category increased by 3.9 percent. The increase is due to both a greater number of low-income census tracts, which may reflect reduced and then stagnating incomes in the post 2007-09 recession period, and more households without a vehicle living more than 0.5 miles from a supermarket. 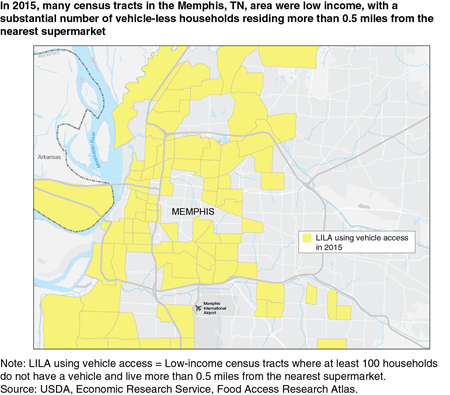 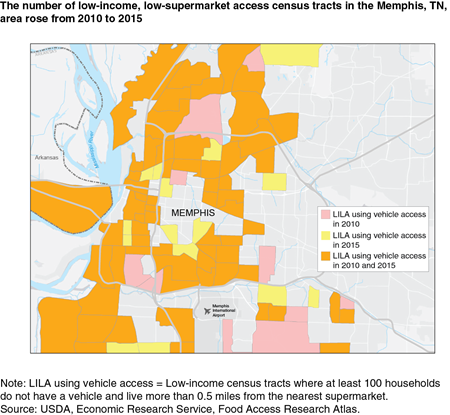